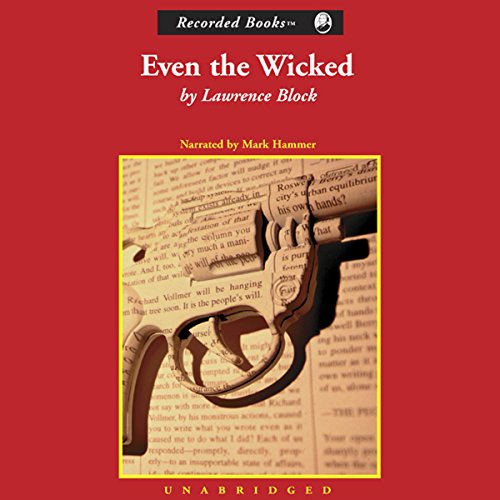 In his popular Matt Scudder mystery series, Edgar and Shamus Award-winner Lawrence Block creates riveting stories set on the hardened streets of New York City. His suspenseful tale Even the Wicked portrays recovering alcoholic P.I. Matt Scudder, who is hot on the trail of a theatrical and twisted criminal.

A demented serial killer, who calls himself "The Will of the People", has gained a wide audience by sending warning letters to the Daily News. When "Will" names a prominent criminal defense attorney as his next victim, Matt suddenly finds himself protecting an old associate.

Matching his wits against the wily murderer, Matt must race to uncover "Will's" identity before he loses his lawyer friend.

Proclaimed a Grand Master by the Mystery Writers of America, Lawrence Block skillfully captures the street-smart language and lifestyles of his home city. Narrator Mark Hammer provides the perfect voices for eccentric characters and evil-minded lawbreakers.

"An ingenious whodunit that's also, in Block's recent manner, a provoking meditation on mortality - with a particularly strong supporting role for the City of New York, which turns in its finest performance since Ellery Queen's Cat of Many Tails." (Kirkus Reviews)