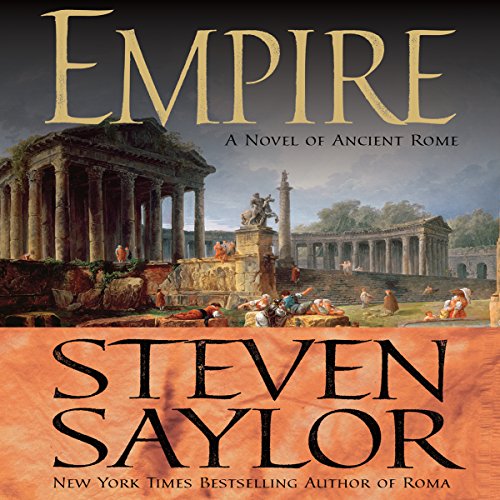 Continuing the epic story begun in his <>i>New York Times best-selling novel Roma, Steven Saylor charts the destinies of five more generations of the aristocratic Pinarius family, from the reign of Augustus to height of Rome’s empire.The Pinarii witness the machinations of Tiberius, the madness of Caligula, and the decadence of Nero. The deadly paranoia of Domitian gives way to the Golden Age of Trajan and Hadrian - but even the most enlightened emperors wield the power to destroy their subjects on a whim.

Empire is filled with the dramatic, defining moments of the age, including the Great Fire of 64 A.D, Nero’s persecution of the Christians, and the astounding opening games of the Colosseum. But at the novel’s heart are the choices and temptations faced by each generation of the Pinarii. One becomes the plaything of the notorious Messalina. One becomes the lover of a Vestal virgin. One falls under the spell of Nero, while another is drawn to the strange new cult of those who call themselves Christians.

While the Pinarii struggle for survival, they also search for meaning. Some cling to the worship of the gods who made Rome great. Others explore the mysteries of astrology, follow the teachings of the wiseman Apollonius of Tyana, or celebrate the beautiful youth elevated by Hadrian to the status of a god.

However diverse their destinies, all the Pinarii are united by the mysterious gold talisman called the fascinum handed down from a time before Rome existed. As it passes from generation to generation, the fascinum seems to exercise a power not only over those who wear it, but over the very fate of the empire.

"Saylor...vividly describes how the family survives the volcanic destruction of Pompeii, the burning of Rome, and the persecution of Jews and Christians." ( Publishers Weekly)

Empire is the sequel to Roma. I have absolutely no clue why Roma and all other of Steven Saylors books aren't available in the german. What's the point of selling a sequel without it's predecessor.What's up audible?

Great Book with an amazing saga like story. It's draws a very clear pah and enlightens about the history of the later empire.

A lot of joy and disgust at the very well described, violent life of roman emperors and their entourage.

Empire is the sequel of Roma. Roma isn't available at Audible. You should know that before buying Empire.