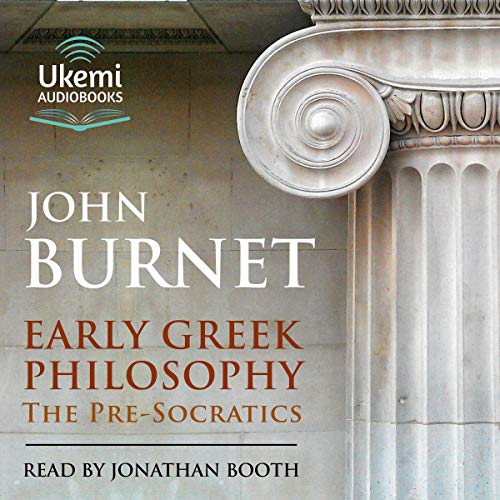 In his introduction to Early Greek Philosophy, John Burnet points out the particular focus of the pre-Socratics on the ‘cosmological’ character of their enquiries. They determined, he explains, to look into the natural world around them. The period can be said to mark the rise of scientific enquiry epitomised by the Atomists and the mathematicians of the Pythagorean School. It was this focus on natural phenomena that set the pattern for the activity that became known as philosophy.

Only later, with Socrates and Plato, would the spotlight of enquiry concentrate on matters such as ethics and morality. The interests of the early philosophers were broader than the cosmological character might suggest and also considered spiritual, mythical and aesthetic elements Burnet’s survey covers the fifth and sixth centuries BCE and the figures who emerged from an Ionian background. He follows his Introduction with 10 chapters, presenting the many figures who left their mark on this period. He opens with The Milesian School, highlighting Thales, Anaximander and Anaximenes. Chapter two looks specifically at science and religion (Pythagoras features here); then come Heraclitus of Ephesus, Parmenides of Elea, Empedokles of Akragas, and on through the continuing developments of early Greek philosophical thinking.

Original extant sources are, it must be said, rare - often they exist only in tiny fragments of a few words, or very short sentences. Perhaps the most famous of them is the remark by Heraclitus: ‘You cannot step twice into the same rivers; for fresh waters are ever flowing in upon you.’ Burnet lists these fragments where they exist.

However, our knowledge of these philosophers, and their views, is often more generally based on accounts and comments by later writers, including Plato and Aristotle, Theophrastus, Aetius, Diogenes Laertius, as well as a variety of Sceptics and Stoics, including Cicero. Burnet closes with a useful note on the sources - biographers, philosophers and doxographers. Although it was originally published in 1892 (this recording is based on the much-revised third edition of 1920), Early Greek Philosophy by John Burnet remains unquestionably one of the most respected and admired surveys of the pre-Socratics. It is an illuminating springboard into classical Greek philosophy.