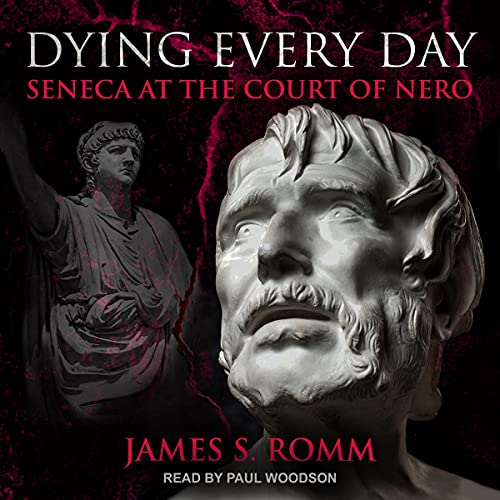 James Romm seamlessly weaves together the life and written words, the moral struggles, political intrigue, and bloody vengeance that enmeshed Seneca the Younger in the twisted imperial family and the perverse, paranoid regime of Emperor Nero, despot and madman.

Romm writes that Seneca watched over Nero as teacher, moral guide, and surrogate father, and, at 17, when Nero abruptly ascended to become emperor of Rome, Seneca became, with Nero, the ruler of the Roman Empire. We see how Seneca was able to control his young student, how, under Seneca's influence, Nero ruled with intelligence and moderation, banned capital punishment, reduced taxes, gave slaves the right to file complaints against their owners, pardoned prisoners arrested for sedition. But with time, as Nero grew vain and disillusioned, Seneca was unable to hold sway over the emperor, and between Nero's mother, Agrippina, and Nero's father, how long could the young Nero have been contained?

Dying Every Day is a portrait of Seneca's moral struggle in the midst of madness and excess. As Nero's adviser, Seneca was presented with a more complex set of choices, as the only man capable of summoning the better aspect of Nero's nature, yet, remaining at Nero's side and colluding in the evil regime he created.