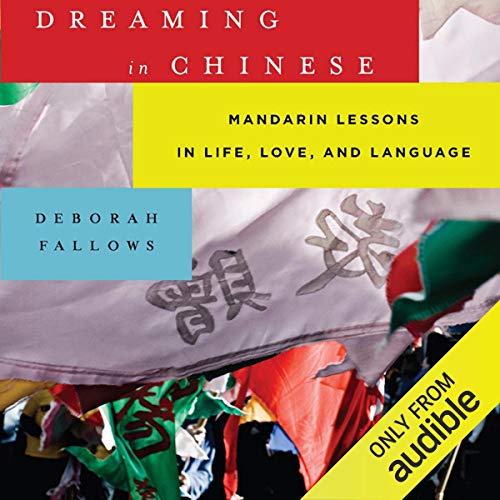 Editors Select, January 2013 - As someone who frequently daydreams of moving to the other side of the world and learning a foreign language (and most likely never will!), I'm finding this book utterly fascinating. The author touches on the subtleties of language - how one word can have several meanings just by the speakers' tone - and how this impacts her interactions while living in Shanghai and Beijing. There are a lot of observations about language in this book, and I'm eager to hear how the narrator captures the journey of learning both the Mandarin Chinese language and culture. —Jessica, Audible Editor

Deborah Fallows has spent a lot of her life learning languages and traveling around the world. But nothing prepared her for the surprises of learning Mandarin - China's most common language - or the intensity of living in Shanghai and Beijing. Over time, she realized that her struggles and triumphs in studying learning the language of her adopted home provided small clues to deciphering behavior and habits of its people, and its culture's conundrums. As her skill with Mandarin increased, bits of the language - a word, a phrase, an oddity of grammar - became windows into understanding romance, humor, protocol, relationships, and the overflowing humanity of modern China.

Fallows learned, for example, that the abrupt, blunt way of speaking which Chinese people sometimes use isn't rudeness, but is, in fact a way to acknowledge and honor the closeness between two friends. She learned that English speakers' trouble with hearing or saying tones - the variations in inflection that can change a word's meaning - is matched by Chinese speakers' inability not to hear tones, or to even take a guess at understanding what might have been meant when foreigners misuse them.

Dreaming in Chinese is the story of what Deborah Fallows discovered about the Chinese language, and how that helped her make sense of what had at first seemed like the chaos and contradiction of everyday life in China.

"You don't have to know Mandarin to be captivated by Deborah Fallows's Dreaming in Chinese.... Forget Berlitz - that just teaches words. Deborah Fallows shows us that the cultural implications of those words teach us about each other." (Sara Nelson, O: The Oprah Magazine)
"Fallows has a good ear for aspect, the way of stressing certain words and syllables to change or add layers of meaning to a simple word or phrase. She veers to the gentle, seeing the generosity behind brusque gestures, the intimacy and friendship behind rudeness and the priorities that language reveals. Playfulness, respect, affection and the virtues of solidarity with the common people - a different traveler might miss all these but not Fallows." (Susan Salter Reynolds, Los Angeles Times)
“Narrator Catherine Byers deftly communicates the intricacies and particularities of the language. The accuracy of her Chinese pronunciation and her demonstrations of tones seem authentic, a factor that is important given what Fallows tells us about the difficulty of Chinese pronunciation and the travails she experienced as a result of her missteps in this regard.” (AudioFile)