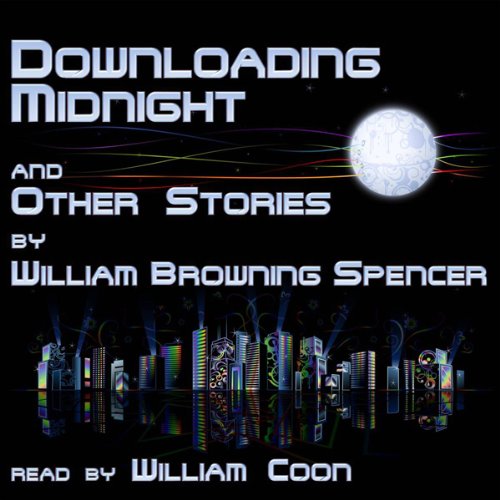 Downloading Midnight and Other Stories

Fifteen years ago, when an interviewer for The Austin American-Statesman asked what it takes to be a writer, William Browning Spencer said, ‘You have to be willing to ruin the rest of your life.’ Mr. Spencer notes that the willingness is more important than the actual result, and that his life is not in ruins. But he does believe that risk-taking is part of the process, not only for the author but for his characters. This is certainly the case for the characters in this collection of stories. There are people in peril here (a therapist, a wife and daughter, a friend) and there are those who would save them by venturing into the unknown. In ‘The Halfway House at the Heart of Darkness’ a virtual reality addictions counselor is on the run with his zoned-out client, pursued by the relentless architects of a seductive virtual game called Apes and Angels. In ‘The Oddskeeper's Daughter’ a marriage made in a heaven of parallel worlds is tested by impossible luck, both good and bad. In ‘Downloading Midnight’ a computer technician must make a dangerous journey into virtual reality in an attempt to save his colleague and prevent the entire web from collapsing. Join us for a mind-bending tour through the imagination of William Browning Spencer.

"William Browning Spencer is one of those rare short story writers who comes along once in a generation -- like Saki, Collier, Sheckley -- and manages to combine all of the virtues within that restricted format." ( Roger Zelazny)
"Strange and haunting tales beautifully told...Spencer's stories are scintillating creations, disturbing and beautiful..." ( Booklist)