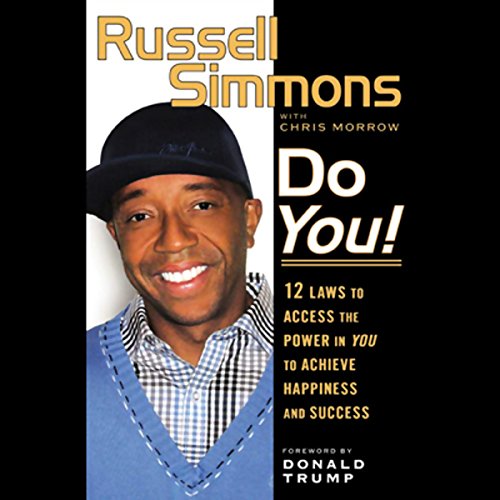 Since rising out of the New York City streets over 25 years ago, Russell Simmons has helped create such ground breaking ventures as Def Jam Records, Phat Farm, and Def Comedy Jam, in the process becoming known the world over as "The CEO of Hip Hop".

Russell might have helped introduce hip-hop to the world, but he credits his success to his belief in a strong set of principles, or laws, which he shares for the first time in this audio. In 12 steps, Russell reveals a path towards success that can be followed not only by those looking to duplicate his professional success, but by anyone struggling to realize a dream.

Those looking solely for advice on how to build up a bank account at the expense of personal integrity should probably look elsewhere. That's because these laws stem from the belief that all success, be it professional or personal, comes from a connection with your higher self. Using examples from his own experiences and observations, Russell demonstrates how tapping into that connection will allow you to get your mind right, find the motivation to start instead of stall, surround yourself with the right people, appreciate the power of hard work, and understand the power of karma.

But most importantly, this book will demonstrate how it's impossible to receive any sort of lasting success from the world without giving something of lasting value to the world first. That's a practice that is reflected in Russell's own work as a mentor and philanthropist and one that he promotes as fundamental to empowerment and success on every level.

Blending business insight, universal spiritual truths, and an inspired sense of purpose, Do You! crosses the lines of age, race, and background with wisdom that will lift you up and motivate you to pursue your vision.

"I consider him one of the great entrepreneurs out there today. Russell knows the market and he sees the future, and that's the ultimate businessperson." (Donald Trump)
"Russell Simmons, the original and eternal Hip-Hop Mogul, is one of the most innovative and influential figures in modern American business and culture." ( The New York Times)
"Simmons is the Godfather. Def Jam was the model that birthed Bad Boy, No Limit, Roc-A-Fella, and all these other labels. And then later, Phat Farm birthed Sean Jean, Rocawear, MarcJacobs, and all these other clothing companies. Russell is the architect of what we do." (Jay-Z)

Wow such a great book. It is funny that I only came to this now in 2021, but I think it’s exactly the message we need to hear today!

found it a great approach to condense a holistic world view on success and thriving in a very straight forward and simplistic manner of talking to the hiphop nation.