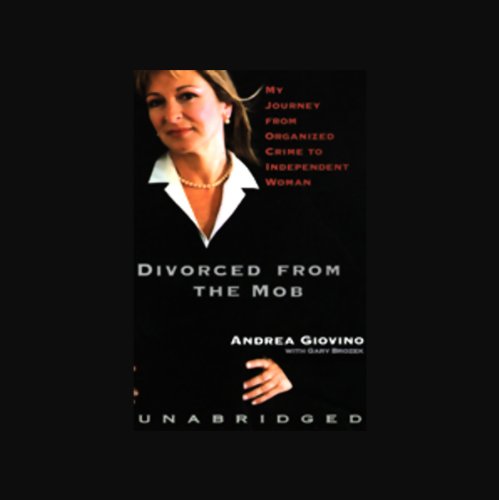 Divorced from the Mob

From mob wife with blood on her hands to straight-arrow breadwinner for her four kids, a tale of transformation and empowerment from a woman whose life in organized crime makes Carmella Soprano look like June Cleaver.

As a child in Brooklyn, New York, Andrea Giovino was pushed out of the house each morning to steal bread and milk from the local grocer, watched her brother become a hit man at age 17, and helped her mother host card games for the Brooklyn wise guys whom she was told would be her ticket to a better life. Divorced from the Mob breaks the mob code of silence and describes the life of a woman born and bred into the Mafia and her inspirational escape.

Sexy and street-smart, Giovino married a mob drug runner, earned a seat at '80s nightclub tables next to John Gotti, and took an emotional and bloody ride through organized crime that no mob movie or HBO series could match. Hers was also the task of keeping her children safe (keeping the guns out of reach, washing bloodstains out of her husband's clothes) and maintaining the household's front as a model of American domesticity in her quietly luxurious Staten Island neighborhood of doctors and lawyers, all the while helping manage a criminal enterprise that raked in the money. A murder, a DEA set-up, and FBI wiretaps finally brought Giovino, her husband, and her brother to the brink of prison. Defiantly, Giovino chose to retain her identity, facing down threats against her life and courageously divorcing herself and her children from the Gambino world of organized crime.

Now a model working parent, Giovino has penned Divorced from the Mob as an inspirational tale for all women, a perspective of mob life largely unexplored by film and literature, and a headline-grabbing expose of organized crime told in a voice readers will never forget.