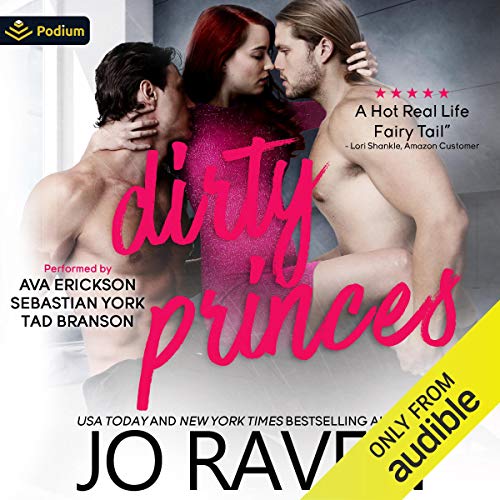 Once upon a time, there lived a princess called Brylee who had a cat and a steady job and her eye on a handsome prince. But Prince Ryan refused to put out.

Then Riddick walked through the door and ate her cookie. Literally, okay? It was a good cookie, too, with chocolate chips.

Riddick is drop-dead gorgeous but not a prince. Regardless, Brylee can't fight that burning attraction. Even when Ryan suddenly becomes interested in her.

This isn't how things were supposed to happen. She was supposed to get a prince, not get caught between a hot prince and a hunky pauper. Come on.

Brylee isn't above letting two men fight for her. After all, that's the essence of a good fairy tale, right? A fight, a winner, a grand wedding, and a happily ever after.

It's fine. After all, she doesn't want them both. At the same time. In her bed. Like, ever. #FamousLastWords

A sexy new stand-alone novel from New York Times best-selling author Jo Raven. Dirty Princes is a laugh-out-loud tale about a funny girl, her cat, and her two super-hot boys.

Author note: This book is funny but also dark and angsty. It is NOT a love triangle. It is a relationship between three people (and a cat) with a happy ending.