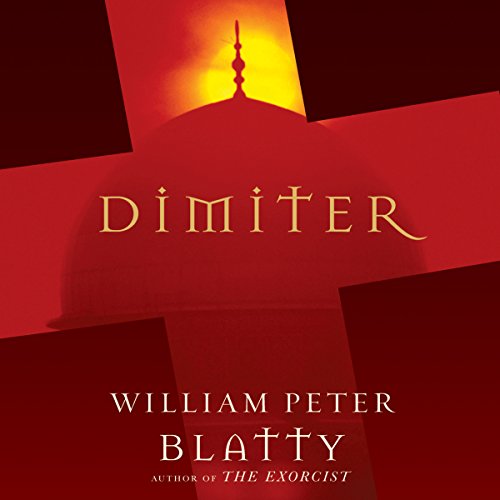 William Peter Blatty has thrilled generations of readers with his iconic mega-best seller The Exorcist. Now Blatty gives us Dimiter, a riveting story of murder, revenge, and suspense. Laced with themes of faith and love, sin and forgiveness, vengeance and compassion, it is a story in the grand tradition of Morris West’s The Devil’s Advocate and the Catholic novels of Graham Greene.

Dimiter opens in the world’s most oppressive and isolated totalitarian state: Albania in the 1970s. A prisoner suspected of being an enemy agent is held by state security. An unsettling presence, though subjected to unimaginable torture he maintains an eerie silence. He escapes---and on the way to freedom, completes a mysterious mission. The prisoner is Dimiter, the American “agent from Hell”.

The scene shifts to Jerusalem, focusing on Hadassah Hospital and a cast of engaging, colorful characters: the brooding Christian Arab police detective, Peter Meral; Dr. Moses Mayo, a troubled but humorous neurologist; Samia, an attractive, sharp-tongued nurse; and assorted American and Israeli functionaries and hospital staff. All become enmeshed in a series of baffling, inexplicable deaths, until events explode in a surprising climax.

Told with unrelenting pace, Dimiter’s compelling, page-turning narrative is haunted by the search for faith and the truths of the human condition.

"Blatty fans looking for straight-up horror in the vein of The Exorcist will be disappointed, but those with broader tastes will find this a beautifully written, haunting tale of vengeance, spiritual searching, loss, and love....The complicated plot confounds until the isolated pieces of the psychological puzzle that's Dimiter match up and fall into place, revealing surprising truths." ( Publishers Weekly)