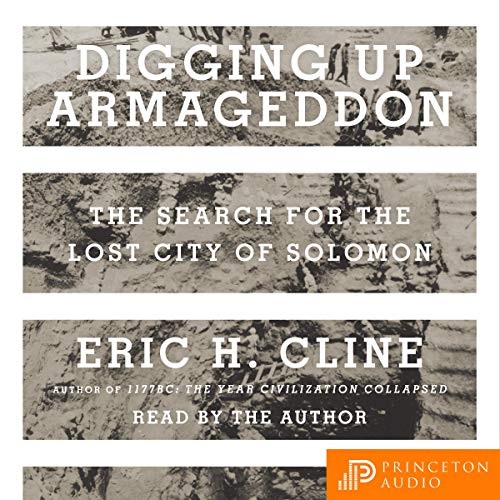 A vivid portrait of the early years of biblical archaeology from the acclaimed author of 1177 BC: The Year Civilization Collapsed

In 1925, James Henry Breasted, famed Egyptologist and director of the Oriental Institute at the University of Chicago, sent a team of archaeologists to the Holy Land to excavate the ancient site of Megiddo - Armageddon in the New Testament - which the Bible says was fortified by King Solomon. Their excavations made headlines around the world and shed light on one of the most legendary cities of biblical times, yet little has been written about what happened behind the scenes. Digging Up Armageddon brings to life one of the most important archaeological expeditions ever undertaken, describing the site and what was found there, including discoveries of gold and ivory, and providing an up-close look at the internal workings of a dig in the early years of biblical archaeology.

The Chicago team left behind a trove of writings and correspondence spanning more than three decades, from letters and cablegrams to cards, notes, and diaries. Eric Cline draws on these materials to paint a compelling portrait of a bygone age of archaeology. He masterfully sets the expedition against the backdrop of the Great Depression in America and the growing troubles and tensions in British Mandate Palestine. He gives listeners an insider's perspective on the debates over what was uncovered at Megiddo, the infighting that roiled the expedition, and the stunning discoveries that transformed our understanding of the ancient world.

Digging Up Armageddon is the enthralling story of an archaeological site in the interwar years and its remarkable place at the crossroads of history.

"Enjoyable, fascinating, and engaging. Digging Up Armageddon is an extremely well written and lively account of perhaps the most important excavations ever conducted in Israel. Cline has, once again, written an excellent book." (Aren M. Maeir, coeditor of The Shephelah During the Iron Age: Recent Archaeological Studies)

"We often hear of grand archaeological discoveries, but we rarely hear about the drama between the men and women behind them. Lively and eye-opening, Digging Up Armageddon reveals the reality-show level of human relationships on archaeological excavations at one of the world's most extraordinary sites, Megiddo, and just how little archaeology has changed in a hundred years. Essential reading for anyone who wants to know how archeological magic truly happens." (Sarah Parcak, author of Archaeology from Space: How the Future Shapes Our Past)

"Megiddo is the mother of all ancient mounds, the cradle of biblical archaeology, a place related to great historical figures such as Thutmose III, Solomon, and Josiah. The excavations at Megiddo were the largest and most romantic in the history of Near Eastern archaeology. Thanks to them, unparalleled monuments from biblical times - gates, palaces, temples, and water systems - were unearthed. But Megiddo has also become the focus of every problem in the archaeology of the region, from questions about the beginning of urbanism to the historicity of a united monarchy of David and Solomon. In this deeply researched, beautifully written, and engaging book, Eric Cline writes the history of the dig at Megiddo, and by doing so, he sheds light on the entire history of the Bronze and Iron Ages in the Levant, including that of ancient Israel." (Israel Finkelstein, coauthor of David and Solomon: In Search of the Bible’s Sacred Kings and the Roots of the Western Tradition)