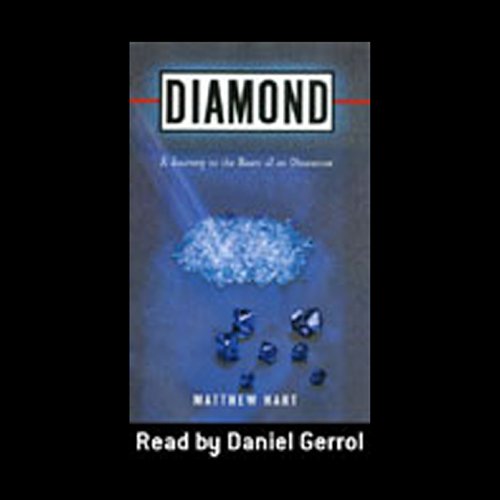 In Diamond, Matthew Hart embarks on a journey into an obsessive, largely hidden, and utterly fascinating world.

The geology of diamonds explains how hard it is to find them. Diamonds are accidents of nature, carbon crystals compressed deep underground billions of years ago; parts of them, it is even thought, may predate the Earth itself. They are also elusive, carried to the surface only in slender volcanoes known as "pipes," most of which are actually barren.

Weaving science and history throughout his story, Hart follows the diamond trail around the globe - from the basement room where Gabi Tolkowsky, the world's greatest cutter, faced the 599-carat Centenary diamond, to the fog-bound smugglers' paradise of Africa's Diamond Coast, to the London sales rooms of De Beers, which manages the longest-running cartel in modern business history - encountering characters as memorable as the stones they seek.

By revealing the layers and inner workings of the diamond industry, and the inherent excitement and human drama that sustain it, Matthew Hart has captured the essence of an exotic substance and its world as surely as a diamond captures light: bending it, reflecting it, and returning it in a blaze of color.

Hart tells a great, great story while explaining one of the world's most mysterious industries. The book is first-rate and immensely readable. - (Sebastian Junger, author of Fire and The Perfect Storm

Every chapter opened my eyes to another intriguing nook of this hidden world. Next to the diamond hunters, Silicon Valley's entrepreneurs and Wall Street's traders seem cautious and small time. - (Po Bronson, author of The Nudist on the Late Shift)