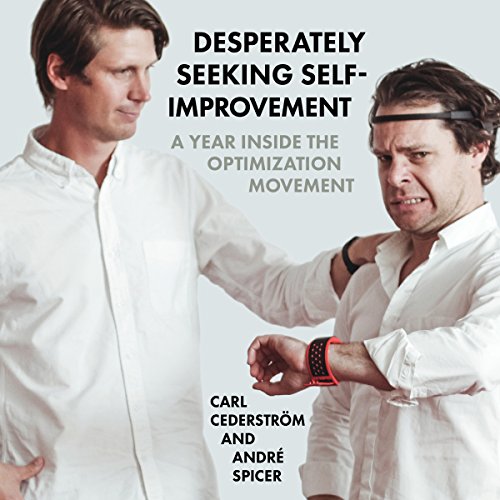 Desperately Seeking Self-Improvement: A Year Inside the Optimization Movement

In this audiobook, the authors of the widely-acclaimed Wellness Syndrome throw themselves headlong into the techniques of self-optimization, a burgeoning movement that seeks to transcend the limits placed on us as mere humans, whether the feebleness of our bodies or our mental incapacities.

Cederstrom and Spicer, devoted each month of a roller coaster year to a different way of improving themselves: January was Productivity, February their bodies, March their brains. June was for sex and September for money. Perhaps the trickiest was April, a month devoted to relationships, when their feelings for each other came under the microscope, with results that were both hilarious and painful. Carl thought Andre was only "dialing it in", Andre felt Carl was too controlling.

In fact, both proved themselves willing guinea pigs in an extraordinary (and sometimes downright dangerous) range of techniques and technologies, had hitherto undertaken little by way of self-improvement. They had rarely seen the inside of a gym, let alone utilized apps that deliver electric shocks in pursuit of improved concentration. They wore head-bands designed to optimize sleep, and attempted to boost their memory through learning associative techniques (failing to be admitted to MENSA bit learning pi to 1,000 digits), trained for weightlifting competitions, wrote what they (still) hope might become a best-selling Scandinavian detective story, attended motivational seminars and tantra workshops, went on new-age retreats and man-camps, and experimented with sex toys and productivity drugs. Andre even addressed a London subway car whilst (nearly) naked in an attempt to overcome a negative body image.