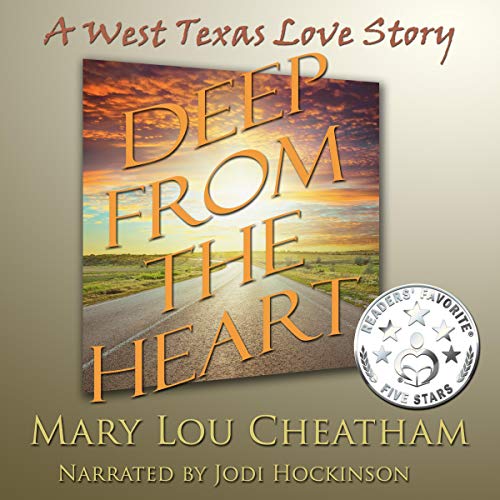 Deep from the Heart

She rescues others. Who’ll rescue her?

Ava discovers an unwelcome surprise in the apartment selected for her by a church leader. Resisting the urge to leave before she even meets the congregation, she must pray and make difficult decisions.

But when she’s followed all over the county, where can she go?

Ava Molino, an overweight millennial minister who has pastored churches in Mississippi, moves to Flat Rock, Texas, to serve at Grace and Peace United Methodist Church. Flat Rock, a small town southwest of Laramie, is in transition from a once prosperous farming community to a low-income town, predominately Hispanic.

The first person Ava meets is Ray Austin, the attractive youthful music minister. She fears he may be under 18 years of age. Except for Ray, the church gives her a cool reception.

The apartment selected for Ava by the church is a smelly run-down dump with a homeless drunk living in it. After demanding to receive cash for her housing allowance, she finds a desirable house to rent.

She has dinner with Jack Perry, who oversees the church finance committee. He sends her mixed signals. Her instincts tell her not to trust him. She meets him at a restaurant on business. After dinner, he chases her through the countryside until she drives to a police station. Her high-minded quest becomes a question of survival.

Ava moves her books into the church office and prepares for Sunday. Grace and Peace Church meets in a magnificent old building in ill repair. The roof is falling in. While she checks out the sanctuary, Ray shows up to work on the sound equipment. Because she assumes he is a teenager, she talks to him as an adult to a child.

As she begins her new ministry, she feels awkward, and the sparse congregation gives her an icy response. She starts conversations in the city park with Hispanics. During lunch at a picnic table, a mature woman shames her about her careless nutritional habits.

Ava keeps a notebook of memories about her assignment at the church. As an honest woman, who communicates details about her intimate relationship with her Heavenly Father, while she strips away the garments of her emotions, Ava reveals all that is in her heart.

She makes new friends in the community and cultivates the programs of the church. Some Hispanic people she meets start to attend Grace and Peace. Someone eggs her car. She takes it to be washed and encounters Jack, who owns the carwash. Her fears increase because Jack continues to stalk her and thwart her efforts to serve Flat Rock. His bizarre actions convince her he is deranged, yet she senses she cannot confront him because he has earned respect in the church and community.

Will Ava find happiness? Will she find love? Will she escape the ominous forces that are mounting against her?