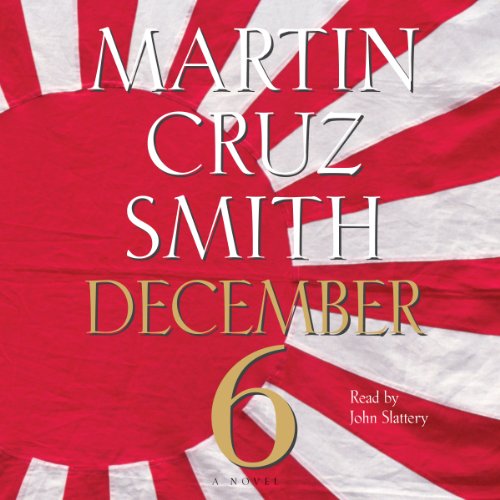 Set in the crazed, nationalistic Tokyo of late 1941, December 6 explores the coming world war through the other end of history's prism - a prism held here by an unforgettable rogue and lover, Harry Niles.

In many ways, Niles is as American as apple pie: raised by ultra-protective missionary parents, taught to honor and respect his elders and be an upright Christian citizen. But Niles is also Japanese: reared in the aesthetics of Shinto and educated in the dance halls and backroom poker gatherings of Tokyo's shady underworld. As a gaijin, a foreigner - especially one with a gift for the artful scam - he draws suspicion and disfavor from Japanese police. This potent mixture of stiff tradition and intrigue - not to mention his brazen love affair with a Japanese mistress who would rather kill Harry than lose him - fills Harry's final days in Tokyo with suspense and fear. Who is he really working for? Is he a spy? For America? For the Emperor?

Now, on the eve of Pearl Harbor, Harry himself must decide where his true allegiances lie. Suspenseful, exciting, and replete with the detailed research Martin Cruz Smith is famous for, December 6 is a triumph of imagination, history and storytelling melded into a magnificent whole.

"A superb thriller and a remarkable evocation of a place....A moving, believable love story in which individual lives are invested with great dignity, even in the face of national ideals." (Booklist, Starred Review)
"Martin Cruz Smith is a master of the international thriller." (The New York Times Book Review)
"The pace is like a bullet train, the characters are limned far beyond the usual stereotype, and the locale is as evocative as the cherry blossom itself." (Library Journal)