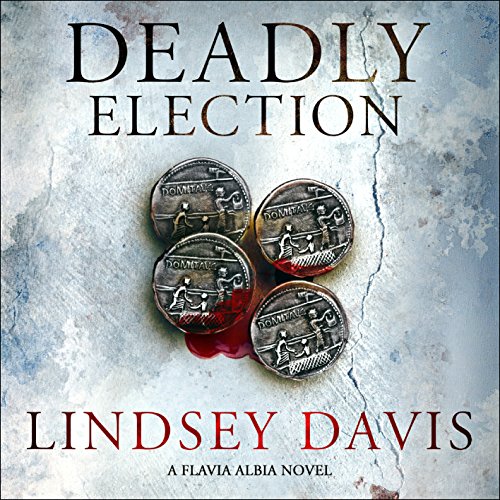 Deadly Election is Book Three in the incredible Flavia Albia series by master thriller writer, Lindsey Davis, and narrated in this unabridged audiobook by actress Jane Collingwood. Investigator Flavia Albia is out to expose the person responsible for the murder of an unknown man whose body was left inside a property owned by her family. Danger draws ever-closer to the unsuspecting Albia. Was the body of the man left randomly? Or did someone plant it there to distract her from an even more ominous operation at work? Available now from Audible.

From the creator of Falco comes Falco: The New Generation, featuring her unforgettable heroine, Flavia Albia, in her third novel.

In the blazing July heat of imperial Rome, Flavia Albia inspects a decomposing corpse. It has been discovered in lots to be auctioned by her family business, so she's determined to identify the dead man and learn how he met his gruesome end.

The investigation will give her a chance to work with the magistrate, Manlius Faustus, the friend she sadly knows to be the last chaste man in Rome. But he's got concerns other than her anonymous corpse. It's election time, and with democracy for sale at Domitian's court, tension has come to a head. Faustus is acting as an agent for a "good husband and father" whose traditional family values are being called into question. Even more disreputable are his rivals, whom Faustus wants Albia to discredit.

As Albia's and Faustus' professional and personal partnership deepens, they have to accept that for others, obsession can turn sour and become a deadly strain that leads, tragically, to murder.