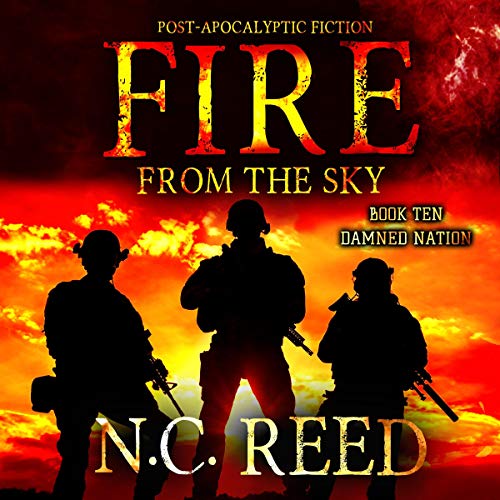 So far, the Apocalypse has not gone according to plan. At least, not according to the plan Clay Sanders and his friends had laid out. Things are finally changing, though for better or worse remains to be seen.

Clay has agreed to offer what assistance the farm can spare to aid Captain Adcock and his National Guard contingent, hoping their presence will help bring order to the area. But trouble is brewing to the south and Adcock must take his men and women to Lewiston, where he finds a town reeling beneath multiple deaths from an unseen enemy. Believing this to be the retaliation that the suicidal zealot had called for with his cryptic message of "brimstone", Adcock tries to contain the situation, only to lose men of his own. Turning to Clay for help on a battlefield that is unfamiliar to soldiers trained for armored combat, Lake learns who and what Clay and the others are while all but begging for help.

Clay is determined to refuse until the problem turns personal, stirring many of his men to make a move toward Lewiston. As if this isn’t enough of a problem, Captain Adcock’s boss, Major Whitten, decides to visit, expressing concerns with having what he considers a Private Military Contractor, or PMC, running loose in his Area of Operations. Oh, and as a lovely parting gift, Whitten uses his authority as the Regional Commander under the martial law provision to appoint Greg Holloway, the sole surviving member of the Calhoun Sheriff’s Office, as the new Sheriff. An appointment Greg is less than thrilled about.

The news they have gotten from Adcock and others has painted a very grim picture indeed to the residents of the farm. Conditions in the larger cities and towns are much worse than even Clay had allowed for and the nation itself is completely crippled. The surviving command structure is unable to communicate with itself or with anyone else and the various services needed to try and rebuild and reestablish order have ceased to function or even exist except possibly on paper. Whatever may remain of the government, wherever they may be, will have an enormous struggle ahead in trying to regain control of the major cities that are rife with violence and atrocities that make Third World nations seem tame.

Until, or unless, that happens, the residents of the farm and the area around them are completely on their own. There will be no material assistance for them, no assistance at all other than the occasional presence of Captain Adcock and his team, trying to keep violence to a minimum wherever they can. If the people of Calhoun and the surrounding counties want the return of any kind of civilized society in the new era they now find themselves living in, then it will be up to them to create that society, and to make it work. They know now that it will be the work of years, perhaps decades, before any form of organized government on that scale can rise from the ashes of the Fire From the Sky. Their once great nation lies in ruin, all that they have worked for gone in a flash of sunlight. The economy, justice system, public services, all of it will now have to be done by the people themselves or else it won’t be done at all.

But even as the friends begin to try and piece together how they can possibly begin rebuilding at least their part of the world into something approaching a working society, one question continues to arise. A burning thought at the back of every mind. Who in their right mind would want to preside over and be responsible for repairing a Damned Nation like the one the US seems to have become?