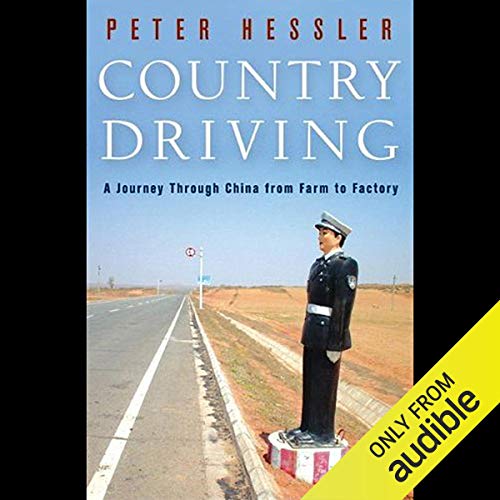 From the best-selling author of Oracle Bones and River Town comes the final book in his award-winning trilogy, on the human side of the economic revolution in China.

In the summer of 2001, Peter Hessler, the longtime Beijing correspondent for The New Yorker, acquired his Chinese driver's license. For the next seven years, he traveled the country, tracking how the automobile and improved roads were transforming China. Hessler writes movingly of the average people - farmers, migrant workers, entrepreneurs - who have reshaped the nation during one of the most critical periods in its modern history.

Country Driving begins with Hessler's 7,000-mile trip across northern China, following the Great Wall, from the East China Sea to the Tibetan plateau. He investigates a historically important rural region being abandoned, as young people migrate to jobs in the southeast.

Next, Hessler spends six years in Sancha, a small farming village in the mountains north of Beijing, which changes dramatically after the local road is paved and the capital's auto boom brings new tourism.

Finally, he turns his attention to urban China, researching development over a period of more than two years in Lishui, a small southeastern city where officials hope that a new government-built expressway will transform a farm region into a major industrial center.

Peter Hessler, whom The Wall Street Journal calls "one of the Western world's most thoughtful writers on modern China", deftly illuminates the vast, shifting landscape of a traditionally rural nation that, having once built walls against foreigners, is now building roads and factory towns that look to the outside world.

"The best yet from Peter Hessler, whose two earlier books, River Town and Oracle Bones, were exemplary forays into the genre. . . . Told with his characteristic blend of empathy, insight, and self-deprecating humor." ( Time)
"[A]n utterly enjoyable guide, with a humane and empathetic eye for the ambitions, the failures, and the comedy of a country in which everybody, it seems, is on the move, and no one is quite sure of the rules." (Amazon.com review)