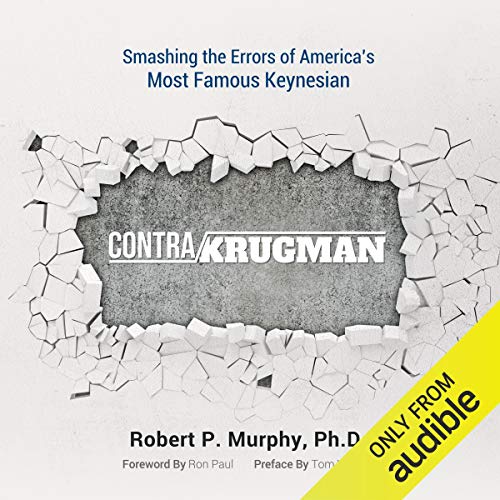 With a foreword by Ron Paul

If you believe in the unhampered free market, The New York Times columnist Paul Krugman thinks you're an idiot.

This book is a relentless assault on the ideas of Krugman and on the Keynesian economics that would have the government direct the economy in order to maximize prosperity and prevent recessions.

In fact, the more they try to manage the economy the worse they make it - as during the housing bubble years when the Fed and the federal government colluded to gin up the housing market in order to keep the economy robust after 9/11. Oops.

Unfortunately for Krugman and his followers, Krugman is able to declare victory for Keynesianism only by citing highly selective data, by ignoring or misrepresenting his own predictions, or by misstating the views of his opponents. Krugman even claims to have predicted the housing bubble - after having called for the very policies that created it.

Economist Robert Murphy (PhD, NYU) has an uncanny ability to recall Krugman's columns and interviews and puts his command of this material to devastating use in this book. As Murphy shows, in no way can it be said that Keynesian analysis has won the day. To the contrary, the Austrian School - which has been critical of government intervention, particularly central banking - has been vindicated in episode after episode.

Listen to this book, and never lose a debate again.

A concise and entertaining takedown of Keynesianism. Tom Woods is an excellent narrator and turns an already great book into an outstanding one. 5/5!