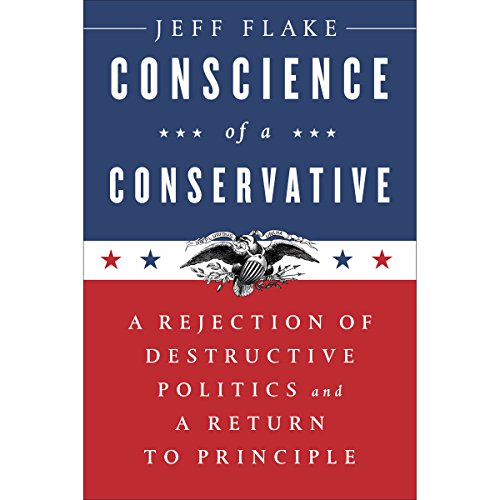 Conscience of a Conservative

In a bold act of conscience, Republican Senator Jeff Flake takes his party to task for embracing nationalism, populism, xenophobia, and the anomalous Trump presidency. The book is an urgent call for a return to bedrock conservative principle and a cry to once again put country before party.

I am a conservative.

But today, the American conservative movement has lost its way. Given the state of our politics, it is no exaggeration to say that this is an urgent matter.

The Republican party used to play to a broader audience, one that demanded that we accomplish something. But in this era of dysfunction, our primary accomplishment has been constructing the argument that we're not to blame. We have decided that it is better to build and maintain a majority by using the levers of power rather than the art of persuasion and the battle of ideas. We've decided that putting party over country is okay. There are many on both sides of the aisle who think this a good model on which to build a political career - destroying, not building.

And all the while, our country burns, our institutions are undermined, and our values are compromised. We have become so estranged from our principles that we no longer know what principle is.

America is not just a collection of transactions. America is also a collection of ideas and values. And these are our values. These are our principles. They are not subject to change, owing to political fashion or cult of personality. I believe that we desperately need to get back to the rigorous, fact-based arguments that made us conservatives in the first place. We need to realize that the stakes are simply too high to remain silent and fall in line.

That is why I have written this book and am taking this stand.