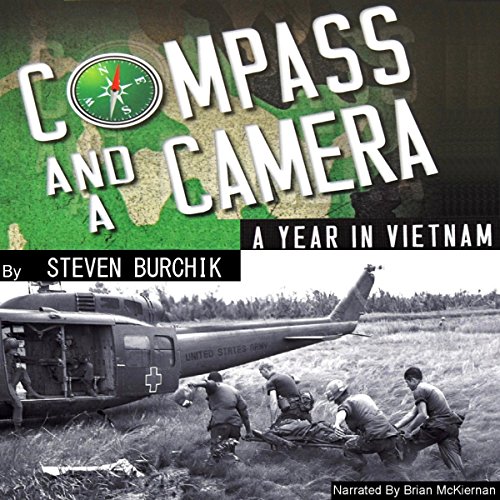 Compass and a Camera

With a compass to direct him in his job as a forward observer and a personal camera to document his experiences - and keep him connected to his creative side - Vietnam veteran Steven Burchik was lucky enough to make it home and years later decided to write about the most challenging year of his life.

Like any experience, his year spent with the First Infantry Division stationed in the rice paddies near Saigon included good times as well as bad. He candidly recalls how, although he believed communism to be a serious threat in the world, he soon learned that a guerilla war is a difficult one to fight, and survival rather than victory quickly became his focus. But he also remembers the exhilaration of helicopter rides over serpentine rivers and the time he introduced village kids to a gumball machine.

A unique memoir of the war, Compass and a Camera pulls not only from Burchik's memories, but also from the daily letters he wrote to his fiancée (she kept every single one). This book is a must-have for any history buff or fellow veteran.

Unprecedented view of a NCO

An Autobiography that put's events in the right spectrum. Very interesting rather than catching. Still worth while hearing for anybody that is interested in getting the big picture of the vietnam war