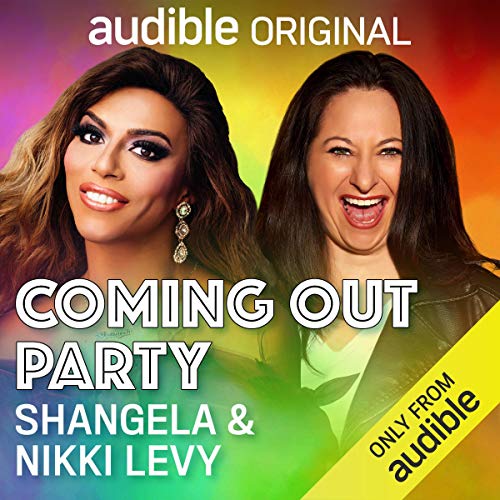 Coming Out Party, produced especially for Pride Month in collaboration with the acclaimed live show Don’t Tell My Mother!, brings Audible members a collection of uplifting, raw, and hilarious stories from queer actors, comedians, and personalities. Cohosted by beloved drag queen Shangela and storytelling maven Nikki Levy, Coming Out Party is a joyous celebration of LGBTQIA+ people and personalities.

You’ll hear live stories from Grey’s Anatomy star Jake Borelli, whose on-screen journey inspired him to come out IRL, comic Nicky Paris (Wendy Williams), whose high school production of Peter Pan taught him "how to grow up", and comic Daniel Webb, who was so fabulous he never really needed to come out...that is, until he met Barack Obama in a BBQ joint. You’ll also hear stories told from inside the closet (literally, from our makeshift home studios - a certain virus cancelled our live shows, but it can’t hurt our pride). Hear how The L Word’s Rosanny Zayas had her first kiss with the coolest girl in school, how Pose’s Angelica Ross navigated “Don’t Ask Don’t Tell” during her time in the navy, and how author Lisa Dickey came out...to the secretary of state himself.

Pride might look different this year, but it can never be canceled! Listen in!