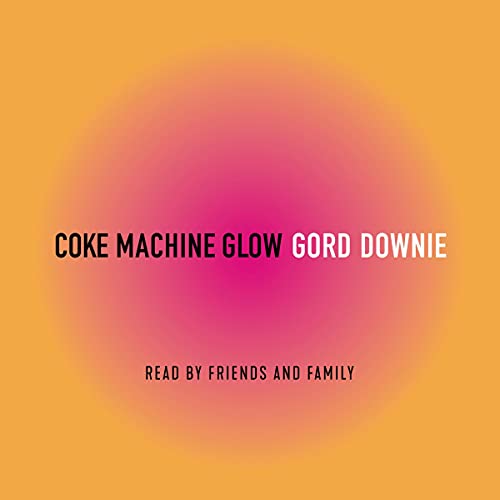 Gordon Downie, lead singer and lyricist for the popular Canadian rock band The Tragically Hip, released his first solo record, Coke Machine Glow, in spring 2001. Alongside the album, his first book of poetry and prose under the same title was published, including the lyrics to the 16 songs on the record. Now, on the 20th-anniversary year of Coke Machine Glow, fans have more to delight in: the audiobook of Coke Machine Glow and a brand-new album by Downie, released posthumously.

Coke Machine Glow is a rich, haunting collection that reveals both the public and private selves of one of Canada's most enigmatic musicians. In poetry that is urban, gritty, and political, as well as romantic, nostalgic, and whimsical, Downie allows us a glimpse inside his world. With his acute and observing eye, he gives us snapshots of his life, both on the road and at home; he writes of loneliness and isolation; of longing and desire; of the present and the past; of dreams and nightmares; love lost and love of family. Ultimately, this book is about the distances that bridge and separate us.

This special audiobook edition features readings from Downie's family and friends, including:

“[Downie] writes in an accessible, entertaining way, but with a refined enough approach that his works can’t be dismissed as crude or simplistic. When he wants, he can be quite funny, and he can drop Canadian references - Pierre Trudeau, Tim Horton's, hockey, Canada geese - without sounding like he’s trying to be Canadian. His particular strength as a poet is his unusual, unexpected imagery...the words are exact, sensuous and satisfying.” (National Post)

“Downie’s fertile imagination can no longer be contained within the Hip alone.” (Nicholas Jennings, Maclean’s)

“Downie has a casually attentive way with words; each one does its work without mystification or excess. At a time when poetry has mostly turned away from large-scale social realities, he bridges deftly and persistently between personal and national narratives. Like Greg Curnoe and Stan Rogers, he never learned that ‘here’ is a four-letter word.” (Robert Everett-Green, Globe and Mail)