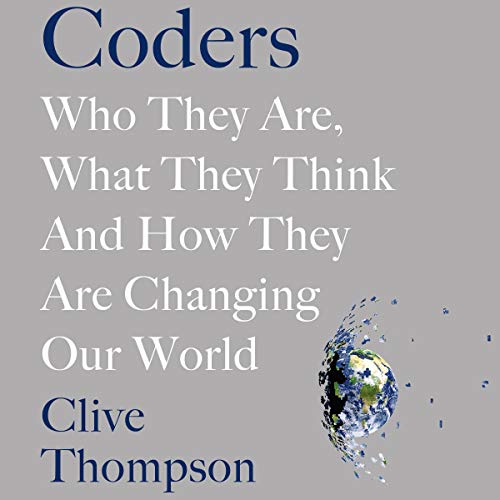 You use software nearly every instant you’re awake. And this may sound weirdly obvious, but every single one of those pieces of software was written by a programmer. Programmers are thus among the most quietly influential people on the planet. As we live in a world made of software, they’re the architects. The decisions they make guide our behavior. When they make something newly easy to do, we do a lot more of it. If they make it hard or impossible to do something, we do less of it.

If we want to understand how today’s world works, we ought to understand something about coders. Who exactly are the people that are building today’s world? What makes them tick? What type of personality is drawn to writing software? And perhaps most interestingly - what does it do to them?

One of the first pieces of coding a newbie learns is the program to make the computer say 'Hello, world!' Like that piece of code, Clive Thompson’s Coders is a delightful place to begin to understand this vocation, which is both a profession and a way of life and which essentially didn’t exist little more than a generation ago, but now is considered just about the only safe bet we can make about what the future holds. Thompson takes us close to some of the great coders of our time and unpacks the surprising history of the field, beginning with the first great coders, who were women. Ironically, if we’re going to traffic in stereotypes, women are arguably 'naturally' better at coding than men, but they were written out of the history and shoved out of the seats, for reasons that are illuminating.

Now programming is indeed, if not a pure brotopia, at least an awfully homogeneous community, which attracts people from a very narrow band of backgrounds and personality types. As Thompson learns, the consequences of that are significant - not least being a fetish for disruption at scale that doesn’t leave much time for pondering larger moral issues of collateral damage. At the same time, coding is a marvellous new art form that has improved the world in innumerable ways, and Thompson reckons deeply, as no one before him has, with what great coding in fact looks like, who creates it, and where they come from. To get as close to his subject as he can, he picks up the thread of his own long-abandoned coding practice and tries his mightiest to up his game, with some surprising results.

dense, succinct, entertaining. Paints a fairly complete picture of the topic. The book that coders want to give to their friends and relatives. Hoping for localization.