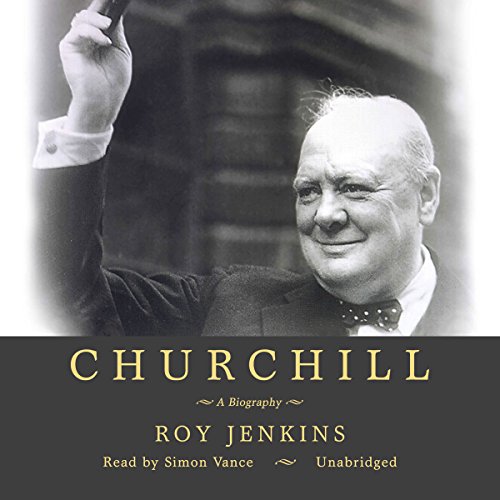 Winston Churchill is an icon of modern history, but even though he was at the forefront of the political scene for almost 60 years, he might be remembered only as a minor player in the drama of British government had it not been for World War II. In this magisterial book, Roy Jenkins' unparalleled command of the political history of Britain and his own high-level government experience combine in a narrative account of Churchill's astounding career that is unmatched in its shrewd insights, its unforgettable anecdotes, the clarity of its overarching themes, and the author's nuanced appreciation of his extraordinary subject.

From a very young age, Churchill believed he was destined to play a great role in the life of his nation, and he determined to prepare himself. Jenkins shows in fascinating detail how Churchill educated himself for greatness, how he worked out his livelihood (writing) as well as his professional life (politics), how he situated himself at every major site or moment in British imperial and governmental life. His parliamentary career was like no other - with its changes of allegiance (from the Conservative to the Liberal and back to the Conservative Party), its troughs and humiliations, its triumphs and peaks - and for decades, especially the crisis years of the late 1930s and the terrifying 1940s, when at last it was clear how vital Churchill was to the very survival of Britain. He evaluates Churchill's other accomplishments, his writings, with equal authority.

Exceptional in its breadth of knowledge and distinguished by its stylish wit and penetrating intelligence, this is one of the finest political biographies of our time.

"A first-class, well-sustained work of history and a masterpiece of biography." ( The Sunday Telegraph)
"This is far and away Churchill's best one-volume biography." (Arthur Schlesinger, Jr.)

There's probably no other statesman in the 20th century who has had such a rich life, and probably no more entertaining biography narrating it. But that's for historians and literary critics to judge. I've found it very instructive and highly entertaining, and couldn't help but admire Robert Whitfield's performance in reading it out loud. The countless quotations are all delivered in a special voice reflecting the character of the personality who enunciated it, and the spirit in which it was pronounced, without interfering with the steady pace of the narrative. Most importantly, all quotations of the Great Man Himself are delivered in a very successful imitation of his voice. Not only adds it greatly to the entertainment value, it also makes the narrative easier to follow. This is quite an achievement. The book is a must-have for audio book lovers and Churchill fans.

Roy Jenkins, retired MP, has written a well versed account of the life of Winston Churchill. Detailed but never boring he explores the early life, first and second &quot;Wilderness Years&quot; and the trumendous undertaking of Churchill to save Western civilisation from collapse and Britain from imminent invasion by the Nazi Reich.
Jenkins is aware of all other Churchill biographies and the contents of the Churchill archive and thus can give precision where others chose to focus on actual events instead of giving a partisan account of the events.

A few more chapters on Churchill's last ten years of life would have been desireable, but this is of course well beyond sincere criticism.

Robert Whitfield is an excellent speaker (his Churchill is very close to the original), only the audio quality is just good.