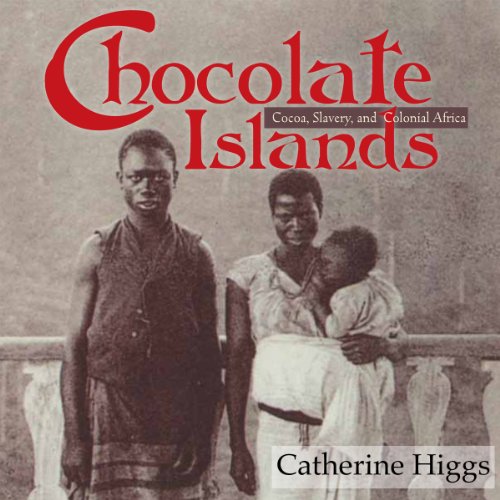 In Chocolate Islands: Cocoa, Slavery, and Colonial Africa, Catherine Higgs traces the early-twentieth-century journey of the Englishman Joseph Burtt to the Portuguese colony of São Tomé and Príncipe - the chocolate islands - through Angola and Mozambique, and finally to British Southern Africa. Burtt had been hired by the chocolate firm Cadbury Brothers Limited to determine if the cocoa it was buying from the islands had been harvested by slave laborers forcibly recruited from Angola, an allegation that became one of the grand scandals of the early colonial era. Burtt spent six months on São Tomé and Príncipe and a year in Angola. His five-month march across Angola in 1906 took him from innocence and credulity to outrage and activism and ultimately helped change labor recruiting practices in colonial Africa.

This beautifully written and engaging travel narrative draws on collections in Portugal, the United Kingdom, and Africa to explore British and Portuguese attitudes toward work, slavery, race, and imperialism. In a story still familiar a century after Burtt's sojourn, Chocolate Islands reveals the idealism, naivety, and racism that shaped attitudes toward Africa, even among those who sought to improve the conditions of its workers.

The book is published by Ohio University Press.

“Higgs takes us into the plantations of the chocolate islands and along the slave routes of southern Africa in this deeply researched and beautifully written investigation of slave, free, and coerced labor in early colonial Africa that began when Cadbury Brothers was accused of using cocoa harvested by slaves.” (Robert Harms, H. J. Heinz Professor of History and African Studies, Yale University)
“Catherine Higgs has combined careful academic research with the kind of skillful writing you'd expect in a good historical novel… . The book is strikingly relevant to today's headlines. It is an excellent study for academics who want to know how to research at a professional level and then write well for the public, and it will strongly appeal to general readers.” ( Book News)
“Higgs offers a well-researched examination of the dynamics of race, labor, and colonialism in the early part of the twentieth century.” ( Booklist)