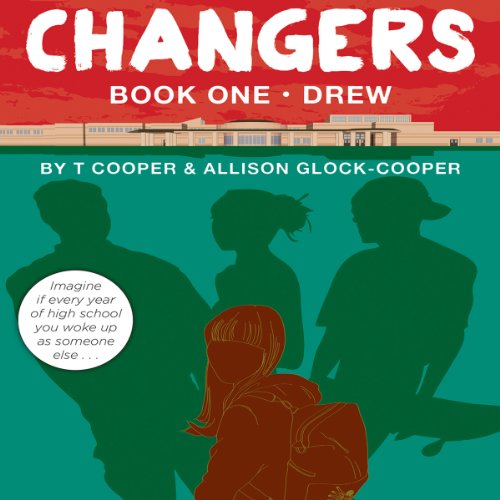 Changers Book One: Drew opens on the eve of Ethan Miller's freshman year of high school in a brand-new town. He's finally sporting a haircut he doesn't hate, has grown two inches since middle school, and can't wait to try out for the soccer team. At last, everything is looking up in life. Until the next morning. When Ethan awakens as a girl.

Ethan is a Changer, a little-known, ancient race of humans who live out each of their four years of high school as a different person. After graduation, Changers choose which version of themselves they will be forever and no, they cannot go back to who they were before the changes began. Ethan must now live as Drew Bohner a petite blonde with an unfortunate last name and navigate the treacherous waters of freshman year while also following the rules: Never tell anyone what you are. Never disobey the Changers Council. And never, ever fall in love with another Changer.

Oh, and Drew also has to battle a creepy underground syndicate called Abiders' (as well as the sadistic school queen bee, Chloe). And she can't even confide in her best friend Audrey, who can never know the real her, without risking both of their lives.

Fans of the audiobooks of John Green, the Joss Whedonverse and empathy between humans will find much to love in this first of a four-part series that tracks the journey of an average suburban boy who becomes an incredible young woman…who becomes a reluctant hero…who becomes the person she was meant to be. Because, while changing the world can kinda suck, it sure beats never knowing who you really are.

"A thought-provoking exploration of identity, gender, and sexuality…an excellent read for any teens questioning their sense of self or gender." (Publishers Weekly)
"A fresh and charmingly narrated look at teens and gender." (Kirkus Reviews)
"I was thrilled to discover a book that deals with issues of identity and belonging with so much heart and, more importantly, humor.... Changers Book One: Drew changed the way I think." (Clay Aiken, singer/UNICEF Ambassador)