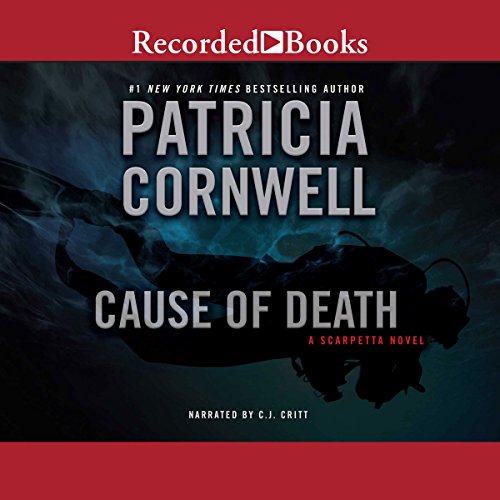 On a quiet day, away from the hustle of Richmond, in a small cottage on the Virginia coast, Dr. Kay Scarpetta receives a disturbing phone call from the Chesapeake police. Thirty feet deep in the murky waters of Virginia's Elizabeth River, a scuba diver's body is discovered near the Inactive Naval Shipyard.

As the police begin searching for clues, the wallet of investigative reporter Ted Eddings is found. Unnerved by the possible identity of the victim, Scarpetta orders the crime scene roped off and left alone until she arrives. What was he doing there, searching for Civil War relics as the officer suggested, or was there a bigger story? As she rifles through the multitude of clues, a second murder hits much closer to home. This new development puts Scarpetta and her colleagues hot on the trail of a military conspiracy.

Filled with lurid details that Cornwell's legions of fans have come to expect, Cause of Death is a breathtaking mystery further enhanced by C. J. Critt's gripping narration.

Cause of Death is the 7th book in the Kay Scarpetta series.

"Cornwell remains a master of the genre, instilling in readers an appetite that only she can satisfy." (Publishers Weekly)
"The fascination with monstrous evil that's run through Cornwell's recent work blossoms with a vengeance....Full marks, as always, for the gripping forensic detail and beleaguered Scarpetta's legendary toughness." (Kirkus)