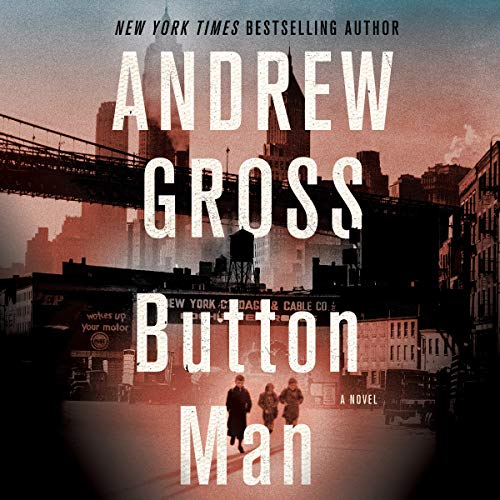 Following up The One Man and The Saboteur, Andrew Gross's next historical thriller audiobook brings to life the dramatic birth of organized crime in 1930s New York City from the tale of one family.

After a string of New York Times best-selling suburban thrillers, Andrew Gross has reinvented himself as a writer of historical thrillers. In his latest audiobook, Button Man, he delivers a stirring story of a Jewish family brought together in the dawn of the women's garment business and torn apart by the birth of organized crime in New York City in the 1930s.

Morris, Sol, and Harry Rabishevsky grew up poor and rough in a tiny flat on the Lower East Side, until the death of their father thrust them into having to fend for themselves and support their large family. Morris, the youngest, dropped out of school at 12 years old and apprenticed himself to a garment cutter in a clothing factory; Sol headed to accounting school; but Harry, scarred by a family tragedy, fell in with a gang of thugs as a teenager. Morris steadily climbs through the ranks at the factory until at 21 he finally goes out on his own, convincing Sol to come work with him. But Harry can't be lured away from the glamour, the power, and the money that come from his association with Louis Buchalter, whom Morris has battled with since his youth and who has risen to become the most ruthless mobster in New York. And when Buchalter sets his sights on the unions that staff the garment makers' factories, a fatal showdown is inevitable, pitting brother against brother.

This new audiobook is equal parts historical thriller, rich with the detail of a vibrant New York City in the 1920s and 1930s, and family saga, based on Andrew Gross's own family story and on the history of the era, complete with appearances by real-life characters like mobsters Louis Lepke and Dutch Schultz and special prosecutor Thomas Dewey, and cements Gross's reputation as today's most atmospheric and original historical thriller writer.