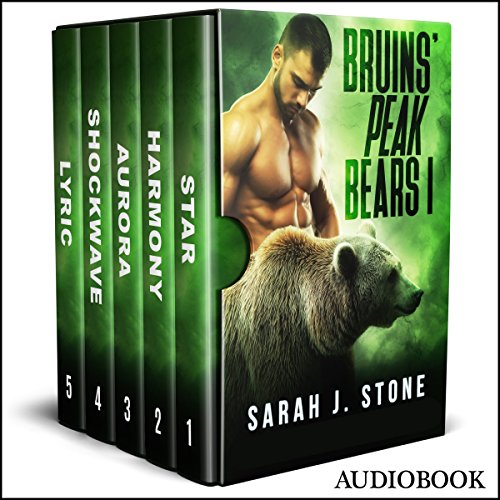 The complete first installment of the Bruins' Peak Bears stories. Books one through five now with an extra book zero backstory!

The year is 1885, and the dusty little town of Iron Bark is just a stage stop on the vast frontier. Lily Cunningham steps off the coach to find a strange man greeting her. Luther Campbell is dapper, rich, and definitely interested in her, but Lily senses something sinister about him from her very first glance. He confirms her suspicions when he refuses to intervene when ruffians attack an innocent mountain man in the street right in front of her. Lily has no choice but to intervene herself.

She finds herself drawn to Jude Farrell in spite of his rough clothing and his unpolished manners. When she meets him again in town, sparks fly and romance blooms. Luther Campbell isn’t happy to lose Lily’s attentions, though, and he sets about making their lives as difficult as possible. In no time, a web of danger, mystery, and competing passions sweep Lily into an unknown world where nothing is what it seems. Can she find her way to a brave new future, or will the frontier’s many dangers overcome her and destroy all her hopes and dreams?

Star Cunningham is a Bruin princess who can make any man weak in the knees, with a temper to match. She can’t stand listening to her father and brothers talk non-stop about the feud raging across Bruins’ Mountain between the Cunninghams and the rival Farrell tribe. Every Bruin in the territory gets pulled into the bloodbath somehow. Star can only escape to her favorite look-out on Bruins’ Peak, but when she gets there, she finds her bench occupied by Brody Farrell.

Brody is muscular, powerful, and certain of his right to claim the Peak as his own. He represents everything Star hates about this feud, but when Star flies in a rage at him, he stands up to her as no one else has ever dared to do. While they’re calling each other names, she lets slip the secret that her father wants to marry her to the son of the Kerr tribe to seal an alliance against the Farrells.

Now what did she have to go and do that for? Will Brody betray her secret to her blood enemies, or can these two dynamic forces find a romance that can blossom in the midst of mayhem?