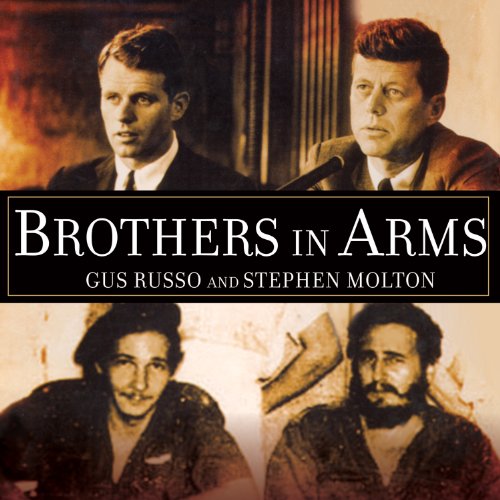 Using breakthrough reporting and interviews with long-silent sources, Gus Russo and Stephen Molton have crafted a dramatic retelling of the time before, during, and after the killing of John F. Kennedy. The book centers on the two opposed sets of brothers - the Kennedys and the Castros - who collectively authored one of modern history's most dangerous, and tragically ironic, chapters.

Bobby Kennedy pushed for the murder of Fidel Castro and instead got the death of his beloved brother, a psychic blow from which he himself never recovered. Lee Harvey Oswald killed an admired president and traumatized a nation, but in so doing may have prevented a third world war. Built on 30 years of intense research - including discoveries so significant that they have rekindled CIA and State Department interest in the Kennedy assassination - Brothers in Arms is a vivid, character-driven, almost cinematic narration of a singularly fascinating time. For neophytes, it is the most accessible and informed single volume on the assassination. For the many people who are fascinated by this story, this book provides extraordinary new facts that will force a reconsideration of how and why the Kennedy murder came to pass.

"A serious, intriguing look at the blood feud whose horrible consequences continue." (Kirkus)
"A powerful piece of historical investigative reporting, accessible both to those familiar with the Kennedy assassination and those less involved with the conspiracy theory." (Booklist)