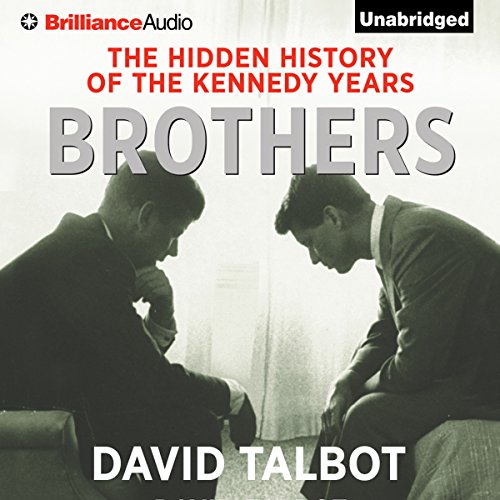 For decades, books about John or Robert Kennedy have woven either a shimmering tale of Camelot gallantry or a tawdry story of runaway ambition and reckless personal behavior. But the real story of the Kennedys in the 1960s has long been submerged - until now. In Brothers: The Hidden History of the Kennedy Years, David Talbot sheds a dramatic new light on the tumultuous inner life of the Kennedy presidency and its stunning aftermath. Talbot, the founder of Salon.com, has written a gripping political history that is sure to be one of the most talked-about books of the year.

Brothers begins on the shattering afternoon of November 22, 1963, as a grief-stricken Robert Kennedy urgently demands answers about the assassination of his brother. Bobby’s suspicions immediately focus on the nest of CIA spies, gangsters, and Cuban exiles that had long been plotting a violent regime change in Cuba. The Kennedys had struggled to control this swamp of anti-Castro intrigue based in southern Florida, but with little success.

Brothers then shifts back in time, revealing the shadowy conflicts that tore apart the Kennedy administration, pitting the young president and his even younger brother against their own national security apparatus. The Kennedy brothers and a small circle of their most trusted advisors - men like Theodore Sorensen, Robert McNamara, and Kenneth O’Donnell, who were so close the Kennedys regarded them as family - repeatedly thwarted Washington’s warrior caste. These hardline generals and spymasters were hell-bent on a showdown with the Communist foe - in Berlin, Laos, Vietnam, and especially Cuba. But the Kennedys continually frustrated their militaristic ambitions, pushing instead for a peaceful resolution to the Cold War. The tensions within the Kennedy administration were heading for an explosive climax, when a burst of gunfire in a sunny Dallas plaza terminated John F. Kennedy’s presidency.

Based on interviews with more than 150 people - including many of the Kennedys’ aging “band of brothers,” whose testimony here might be their final word on this epic political story - as well as newly released government documents, Brothers reveals the compelling, untold story of the Kennedy years, including JFK’s heroic efforts to keep the country out of a cataclysmic war and Bobby Kennedy’s secret quest to solve his beloved brother’s murder. Bobby’s subterranean search was a dangerous one and led, in part, to his own quest for power in 1968, in a passion-filled campaign that ended with his own murder. As Talbot reveals here, RFK might have been the victim of the same plotters he suspected of killing his brother. This is historical storytelling at its riveting best - meticulously researched and movingly told.

Brothers is a sprawling narrative about the clash of powerful men and the darker side of the Cold War - a tale of tragic grandeur that is certain to change our understanding of the relentlessly fascinating Kennedy saga.