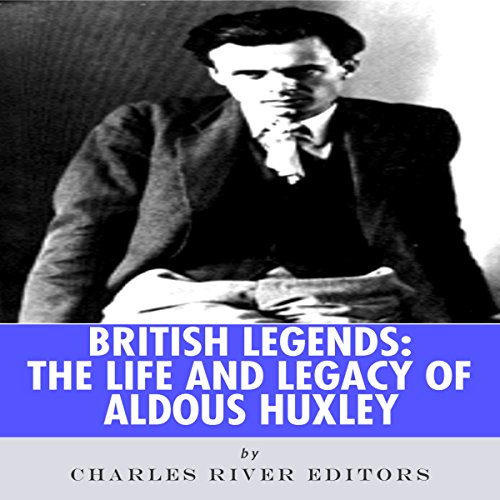 A lot of ink has been spilled covering the lives of history’s most influential figures, but how much of the forest is lost for the trees? In Charles River Editors’ British Legends series, listeners can get caught up to speed on the lives of Great Britain’s most important men and women in the time it takes to finish a commute, while learning interesting facts long forgotten or never known.

In 19th century England, few families were as accomplished as the Huxley family, which included prominent figures in the arts, sciences, and literature, but the most famous of them all would come of age in the early 20th century.

Aldous Huxley was one of the most unique intellectuals of his age, but he was also one of the greatest. While he was controversial for dabbling with mysticism, a belief in parapsychology and the supernatural, and for advocating the use of psychedelic drugs, nobody could deny his abilities. Having grown up among the Huxley family, Aldous was well-versed in everything from botany to zoology, which helped him write one of the seminal futuristic science fiction novels, Brave New World, which he claimed sprang forth from him because of his experience in "an ordered universe in a world of planless incoherence".

Brave New World is still Huxley’s best known work, and it has often drawn comparisons to the works of H.G. Wells and his friend George Orwell’s Nineteen Eighty-Four. The futuristic novel, which also doubled as social commentary, was full of the kind of biting satire that had already gotten Huxley hired as a social satirist and contributor to publications like Vanity Fair. In the years after World War II, Huxley’s pessimism in the current state of civilization would only grow, and he would become a more pronounced pacifist and humanist, writing at length about how the world’s goals were thwarted by its own methods for achieving them.

British Legends: The Life and Legacy of Aldous Huxley chronicles the life, writings, and legacy of the famous intellectual.