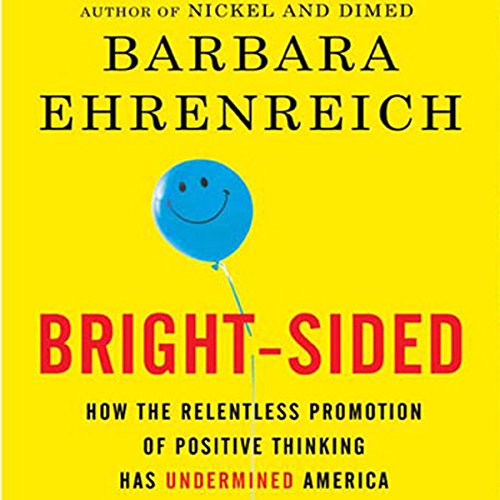 Liberal essayist Barbara Ehrenreich has been cranking out a fresh book on some aspect of the follies and failings in American social justice every few years since 1969. Twenty books later, she brings us this gem addressing the perils of positive thinking. Named a "Voice of the Century" by AudioFile magazine, Kate Reading has given voice to well over a hundred books and is one of Audible's featured narrators. This is Reading's first time at bat with Ehrenreich's work, and predictably, she knocks it out of the park.

The majority of Ehrenreich's books tend to focus on a large institution or systemic national problem, such as health care or concerns of the middle class. Bright-sided tackles the increasingly fashionable idea that "the power of positive thinking" can guide Americans through any type of crisis. Unlike some of her previous work, this book aligns all of Ehrenreich's interests and brings each facet of her expertise to bear on one very nebulous and fluffy opponent. Across this shady and shifting psychological battlefield, Reading keeps up every step of the way. Her tone is terrifically authoritative and methodical in the opening chapters where Ehrenreich uses her degree in microbiology to knock down the pseudoscientific studies and rationales for promoting optimism one by one. Reading softens the critical edge without getting overly syrupy when Ehrenreich moves into her more personal anecdotes about struggling to defeat breast cancer without the aid of cheerfulness.

Where both author and narrator really shine is the second half of the book, which attacks the three-headed zombie of academic, religious, and economic blindness created by this new culture of "optimism at all costs". Reading's witty account of Ehrenreich's reluctant participation in a set of terrifyingly solipsistic corporate motivation seminars is laugh-out-loud funny. Her sly report of the author's attempt to interview one of the most renowned psychologists in the positive thinking industry and her indignant take on the author's visitation to an evangelical mega-church will leave your blood boiling. After all the piling up of mortgage defaults and other assorted hardships that stem from too much happy talk and not enough material consideration, Ehrenreich's call to vigilant realism is as inevitable as it is refreshing. Kate Reading's crafty rendering of Ehrenreich's latest myth-busting book is sure to lift the spirits of all who feel guilty for finding little to smile about in these uncertain times. Megan Volpert

Barbara Ehrenreich's Bright-sided is a sharp-witted knockdown of America's love affair with positive thinking and an urgent call for a new commitment to realism.

Americans are a "positive" people - cheerful, optimistic, and upbeat: this is our reputation as well as our self-image. But more than a temperament, being positive, we are told, is the key to success and prosperity.

In this utterly original take on the American frame of mind, Barbara Ehrenreich traces the strange career of our sunny outlook from its origins as a marginal 19th-century healing technique to its enshrinement as a dominant, almost mandatory, cultural attitude. Evangelical mega-churches preach the good news that you only have to want something to get it, because God wants to "prosper" you. The medical profession prescribes positive thinking for its presumed health benefits. Academia has made room for new departments of "positive psychology" and the "science of happiness." Nowhere, though, has bright-siding taken firmer root than within the business community, where, as Ehrenreich shows, the refusal even to consider negative outcomes - like mortgage defaults - contributed directly to the current economic crisis.

With the mythbusting powers for which she is acclaimed, Ehrenreich exposes the downside of America's penchant for positive thinking: On a personal level, it leads to self-blame and a morbid preoccupation with stamping out "negative" thoughts. On a national level, it's brought us an era of irrational optimism resulting in disaster. This is Ehrenreich at her provocative best - poking holes in conventional wisdom and faux science, and ending with a call for existential clarity and courage.

"In this hilarious and devastating critique, Barbara Ehrenreich applies some much needed negativity to the zillion-dollar business of positive thinking. This is truly a text for the times." (Katha Pollitt)
"Unless you keep on saying that you believe in fairies, Tinker Bell will check out, and what's more, her sad demise will be your fault! Barbara Ehrenreich scores again for the independent-minded in resisting this drool and all those who wallow in it." (Christopher Hitchens)