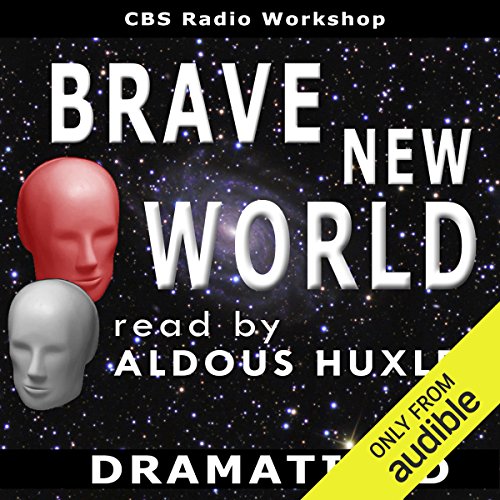 The CBS Radio Workshop was an experimental series of productions, subtitled "radio's distinguished series to man's imagination" that ran between 27 January 1956 and 22 September 1957. The premiere production was Brave New World, narrated by Huxley himself, with a complicated sound-effects score that evidently took a long time to construct, and comprised a ticking metronome, tom-tom beats, bubbling water, an air hose, a cow's moo, an oscillator, and three kinds of wine glasses clicking together. There was also a cast of some ten actors.

What was most evident about this two-part adaptation, now available on podcast, was the vocal contrasts: between Huxley the narrator, telling the story in a cut-glass marked RP accent interspersed with occasional Americanisms ("diaper" instead of "nappy," for instance); the Controller, who spoke throughout in jovial tones, appropriate for the Brave New World of perpetual happiness; and the Savage, the representative of feeling, emotional humanity - now consigned to a reserve in darkest Mexico - whose tones became increasingly desperate as he understood how mechanized the universe had become.

The Brave New World was a topsy-turvy environment, which despised institutions such as marriage and parenthood (any mention of such terms was greeted with scornful laughter), and advocated free love without passion. Everyone belonged to everyone else, and no one needed to think any more. Despite the Director's jovial protestations that this was the best of all possible worlds (shades of Voltaire's Candide), the doom-laden consequences of what had happened were suggested by Bernard Herrman's specially composed score, full of doom-laden chords, and metronome-like chimes played on the tubular bells. The adaptation was announced by the actor William Conrad - who subsequently found fame on television as the corpulent detective Cannon: at the end of the first episode he informed listeners in no uncertain terms about the moral purpose of Froug's adaptation. It was intended as a "warning against the destruction of moral standards, family life and the soul of man."