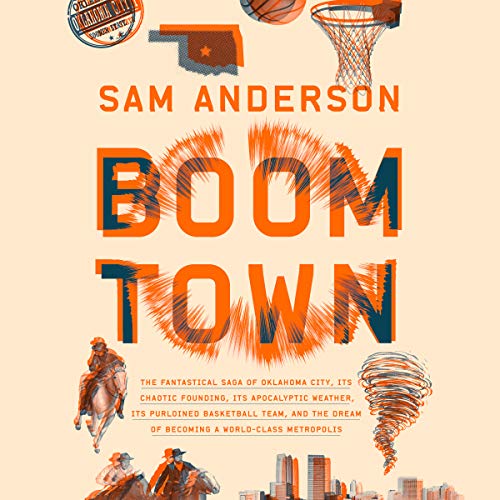 A New York Times notable book of 2018. Named a best book of 2018 by NPR, Chicago Tribune, San Francisco Chronicle, and The Economist and Deadspin.

Oklahoma City was born from chaos. It was founded in a bizarre but momentous "Land Run" in 1889, when thousands of people lined up along the borders of Oklahoma Territory and rushed in at noon to stake their claims. Since then, it has been a city torn between the wild energy that drives its outsize ambitions and the forces of order that seek sustainable progress.

Nowhere was this dynamic better realized than in the drama of the Oklahoma City Thunder basketball team’s 2012-13 season, when the Thunder’s brilliant general manager, Sam Presti, ignited a firestorm by trading future superstar James Harden just days before the first game. Presti’s all-in gamble on “the Process”- the patient, methodical management style that dictated the trade as the team’s best hope for long-term greatness - kicked off a pivotal year in the city’s history, one that would include pitched battles over urban planning, a series of cataclysmic tornadoes, and the frenzied hope that an NBA championship might finally deliver the glory of which the city had always dreamed.

“[Anderson] has discovered a subject that energizes him the way a birch-bark canoe roused John McPhee, the way a French meal stoked M.F.K. Fisher, and the way a burning Bronx fired up Jonathan Mahler.... Unlike navel-gazing yappers like Hunter S. Thompson, Anderson doesn’t splatter himself all over the story. He never drowns out anyone with his sly, entertaining voice. His sensibility, sophisticated though it may be, is generous enough to stand up and offer its seat to others... For all of the surrealism in [Franz Kafka’s Oklahoma-set] Amerika, whose runic metaphysics helped give rise to the adjective ‘Kafkaesque,’ the manuscript doesn’t begin to match the genuinely American phantasmagoria of Boom Town. What’s most surreal about Oklahoma City, as brilliantly rendered in Anderson’s wild and gusty history, is that this city is for real.” (The New York Times Book Review)

“[Boom Town is a] dizzyingly pleasurable new history of Oklahoma City. If ‘dizzyingly pleasurable’ and ‘Oklahoma City’ aren’t words you expect to see in the same sentence, Anderson’s book wants to convince you that the capital of America’s 46th state is the most secretly fascinating place on earth.... It’s a peculiarly concentrated locus of old American energies, creative, destructive, and bizarre, and Anderson illuminates both the romance and the hubris of a city that went from wild gunfights to unrestrained freeways in a single human lifetime.... Boom Town is a dazzling urban history.... Anderson writes beautifully about the human beings he encounters, both living and dead. A minute-by-minute account of the Oklahoma City bombing left me almost in tears.... Anderson’s curious, hilarious, and wildly erudite book vividly evokes the bonk he describes here, as it holds together, quivers, and remakes itself over the following century.” (Brian Phillips, The New Yorker)

“A delightfully deep dive into ‘one of the great weirdo cities of the world’.... [Boom Town is] one of the more unexpectedly entertaining - and stimulating - nonfiction romps in recent memory. Anderson deftly weaves together history, personalities and his own observations.” (San Francisco Chronicle)