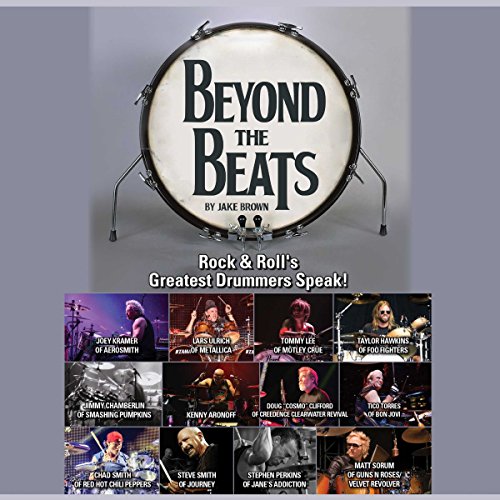 When Rolling Stone magazine publishes its list of the greatest drummers of all time, and a book's entire table of contents is included, you know you're onto something truly great. Beyond the Beats: Rock & Roll's Greatest Drummers Speak! hits with the loudest bang as the first definitive book of its kind. A book by drummers for drummers, featuring exclusive, chapter-length interviews with rock and metal's most popular players of the past 40 years, this rock & roll royalty includes Tommy Lee of Motley Crue, Lars Ulrich of Metallica, Joey Kramer of Aerosmith, Jimmy Chamberlin of the Smashing Pumpkins, Tico Torres of Bon Jovi, Chad Smith of the Red Hot Chili Peppers, Taylor Hawkins of the Foo Fighters, Stephen Perkins of Jane's Addiction, Doug "Cosmo" Clifford of Creedence Clearwater Revival, Steve Smith of Journey, Kenny Aronoff of John Mellencamp/John Fogerty, and Matt Sorum of Guns N' Roses/Velvet Revolver.

For rock and metal drummers of any generation, this is their holy grail, featuring the stories behind literally hundreds of their favorite beats, from popular classic rock radio hits like "Walk This Way" by Aerosmith, "Down on the Corner" by Creedence Clearwater Revival, and "Living on a Prayer" by Bon Jovi to "Hurts So Good" by John Mellencamp and "Don't Stop Believin'" by Journey, and for the heavier metal fans, everything from Metallica's greatest hits, from "Master of Puppets" to "One" and "Enter Sandman", Motley Crue's "Kickstart My Heart" or Guns N' Roses' "You Could Be Mine", or "Give It Away" by the Red Hot Chili Peppers, "Three Days" by Jane's Addiction, "Times Like These" by the Foo Fighters or "Today", "Bullet with Butterfly Wings", or "I Am One" by Smashing Pumpkins and hundreds of other hits across every generation and sub-genre of rock & roll were created from behind the kit.