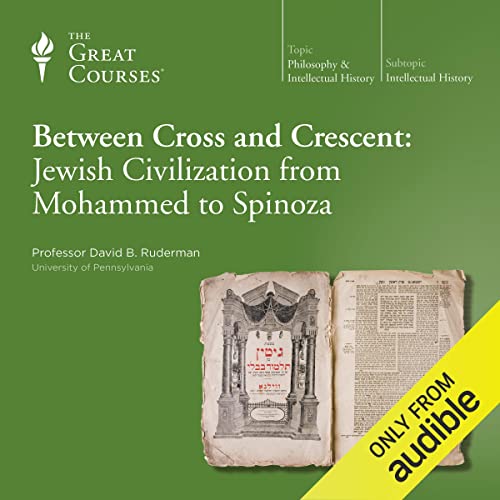 Between Cross and Crescent: Jewish Civilization from Mohammed to Spinoza

Experience the evolution of all of Jewish life during the 10 critical centuries from its rabbinic foundations in late antiquity until the dawn of modernity in the 17th century. During this time, Judaism was forever affected by its encounters with the surrounding social, economic, political, and intellectual environments of both medieval Islam and Christendom.

As a result of those encounters, new pathways of philosophical inquiry and religious spirituality would be formed. The Hebrew language would find new ways of artistic expression. And the role of Jews in the life of the surrounding community would be changed forever, sometimes even increased, as was the paradoxical case in Italy, by the very ghettoization meant to keep them isolated.

These 24 insightful lectures give you a unique perspective from which to examine the three major Western religions as they interact over time, and noting especially their ability or inability to tolerate and even appreciate the "other", as viewed from the vantage point of the Jewish minority. They also feature the emergence of two distinct intellectual threads: the rise of medieval Jewish philosophy and the appearance of Jewish mysticism and piety as the faith's primary expressions of religiosity.

These lectures span an enormous disciplinary range, moving back and forth among history, philosophy, religion, and art. No previous familiarity with Jewish, Islamic, or Christian history is necessary to enjoy this broad and detailed examination of the leading Jewish communities of the period, their political and economic structures, the social relations between Jews and non-Jews, and Jewish cultural and intellectual achievements in a premodern world dominated by two other faiths.