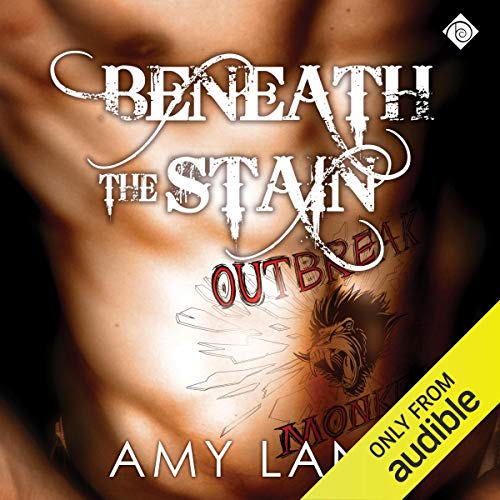 In a town as small as Tyson, CA, everybody knew the four brothers with the four different fathers - and their penchant for making good music when they weren't getting into trouble. For Mackey Sanders, playing in Outbreak Monkey with his brothers and their friends - especially Grant Adams - made Tyson bearable. But Grant has plans for getting Mackey and the Sanders boys out of Tyson, even if that means staying behind.

Between the heartbreak of leaving Grant and the terrifying, glamorous life of rock stardom, Mackey is adrift and sinking fast. When he's hit rock bottom, Trav Ford shows up, courtesy of their record company and a producer who wants to see what Mackey can do if he doesn't flame out first. But cleaning up his act means coming clean about Grant, and that's not easy to do or say. Mackey might make it with Trav's help - but Trav's not sure he's going to survive falling in love with Mackey.

Mackey James Sanders comes with a whole lot of messy, painful baggage, and law-and-order Trav doesn't do messy or painful. And just when Trav thinks they may have mastered every demon in Mackey's past, the biggest, baddest demon of all comes knocking.

It hurts - but in a good way

In good old Amy Lane fashion, this is a multi-layered story about growing up, finding yourself and finding love in the process. It's easy to relate to Mackey, or Trav, or even Grant, and that's why this story hurts a lot but also makes you happy when the characters are happy.

It's especially easy to fall in love with Grant the way Mackey did because Nick J Russo just gives him the sexiest little drawl. It always blows me away how versatile Russo's voice is and it really shows in this story again. So many characters and it's easy to tell them apart just from the cadence of Russo's voice, or the accent he bestows upon them.

As ever, there's some cis sexism, and some internalised misogyny only gay men are capable of in the story and language but overall Amy Lane is still one of the authors I trust to bring some diversity into her plots and to make male characters the kind that will stick up for women and - at least to some degree - question and challenge their own privilege.

Some of the sex scenes or sexually loaded scenes are packed full of the kind of language that makes me laugh more than it turns me on but I suppose that's par for the course. My all time favourite quote: "His cock lit up like a solar flare." ... that's got to hurt, but at least you'll be able to see in the dark, right? All the more credit to Russo for keeping me in the story regardless (and for not letting his smile be heard if he found the language just as ridiculous).

In the following there are spoilers for plot points you may not want to be spoiled for. However, if you'd like a warning about some of the heavier themes, read on.

Despite the obvious drug use, the following things happen to some of the characters (both minor and major): child abuse, sexual child abuse, rape (date rape) with forced drugging, terminal illness (not for the major characters).

The sexual abuse of a child is hinted at a couple of times but never fully brought to light until almost the end. While I think that it's important to address these topics, I wish that it would've been given more time. It happens/ed to a side character and thus their issues aren't explored as thoroughly, lest the story loses itself in the side plots. But while it's gratifying to know that their true family (the ones not related by blood) stands behind them and is ready to defend and shield them, I wish there had been more about a known child molester getting his due. Instead, he got away without so much as a scratch. I'm not a survivor of that kind of abuse myself, but I know people who are, and if not in fiction, where else are they going to get the satisfaction of seeing people who hurt them get what's coming to them?

The date rapist is caught and put into jail for assault, but not for rape to protect the survivor from public ridicule and humiliation, which is agonisingly realistic given real life politics and justice systems, and at least it's more than the damn child molester got.

Overall this audiobook gets a 4.5 star rating, and a lot of it is for Nick J Russo's narration, and the rest of it is for Amy Lane who made me laugh (sometimes involuntarily) and cry (definitely voluntarily).