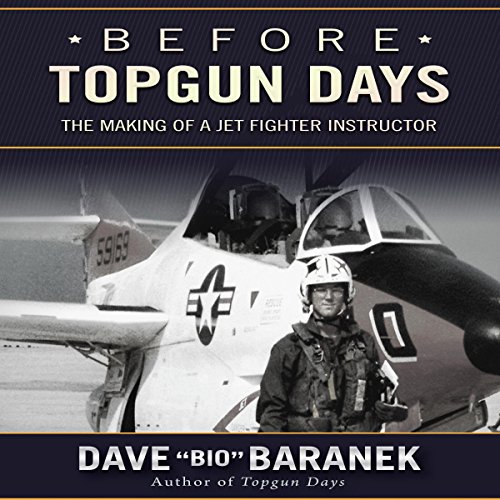 Becoming the best doesn't happen overnight; you've got to work for it.

Before becoming an instructor in the Navy's Topgun program, Dave "Bio" Baranek was just another kid with a dream. Upon graduating from college, he joined the Navy with the goal of becoming a fighter pilot. But, his eyesight waning, he knew that he would never be able to reach that goal. Undaunted, he plowed ahead and found his niche as a radar intercept operator in the backseat of the sleek, new Grumman F-14 Tomcat.

Join Baranek in Before Topgun Days as he takes you along for this greatest, most exciting time of his young life: training to become a naval flight officer. Taking place before the events recounted in his previous memoir, Topgun Days, Baranek brings to life the anxieties and excitement of entering the fast-paced world of fighter jocks. From a green recruit to an experienced flyer, discover what it took to become a Topgun instructor.

Skyhorse Publishing, along with our Arcade, Good Books, Sports Publishing, and Yucca imprints, is proud to publish a broad range of biographies, autobiographies, and memoirs. Our list includes biographies on well-known historical figures like Benjamin Franklin, Nelson Mandela, and Alexander Graham Bell, as well as villains from history, such as Heinrich Himmler, John Wayne Gacy, and O. J. Simpson. We have also published survivor stories of World War II, memoirs about overcoming adversity, first-hand tales of adventure, and much more. While not every title we publish becomes a New York Times best seller or a national best seller, we are committed to books on subjects that are sometimes overlooked and to authors whose work might not otherwise find a home.