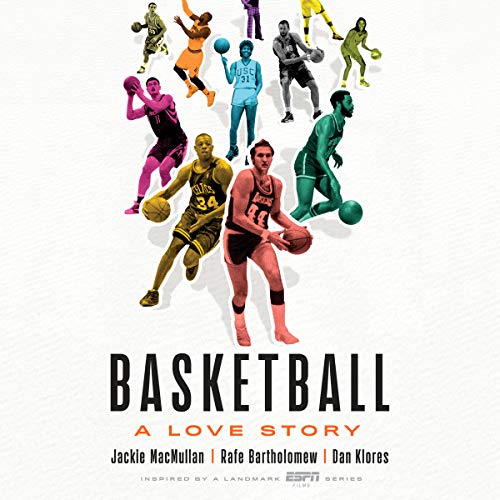 A sweeping and revelatory history of basketball, drawing upon hundreds of hours of interviews with the greatest players, coaches, executives, and journalists in the history of the game.

In an effort to tell the complete story of basketball in all its fascinating dimensions, acclaimed authors Jackie MacMullan, Rafe Bartholomew, and Dan Klores have compiled nearly a thousand hours' worth of interviews with a staggering number of basketball greats. They've talked to hundreds of legendary players, such as Kobe Bryant, LeBron James, and Magic Johnson, and spoken with renowned coaches, including Phil Jackson and Coach K, as well as numerous executives, commissioners, and journalists. Most impressive was the extraordinary quality of the interviews. Again and again, players spoke candidly about secrets and told stories they'd never before discussed on the record.

The audiobook that grew out of those interviews is an extraordinary project and quite possibly the most ambitious basketball work ever made. At once a definitive oral history and something far more literary and intimate, this is the never-before-told story of how basketball came to be and about what it means to those who've given their lives to the game.

"This is a shadow history of how basketball became the game that it is today - it's all the details you don't know about the all the stuff you always thought you understood. Maybe you think you know everything about Wilt's 100-point game. You don't. Maybe you think you have a grasp on the ABA and the ACC and the complexity of institutional racism and Michael Jordan's secret grudge with George Gervin. You do not. This is not a book for people who just think basketball is OK. This is a book for people who care." (Chuck Klosterman, New York Times best-selling author of I Wear the Black Hat and But What If We're Wrong?)

“The boldface names (Russell, Wilt, West, Jordan, Bird, Magic) and the boldface events (Celtics dynasty, Showtime, Magic's HIV) are all here. But what I appreciate most about A Love Story were the reminiscences about the women's game and especially the accounts of the racial battles fought by the game's pioneers. Jackie and Rafe have done a masterful job of historical hoops excavation.” (Jack McCallum, New York Times best-selling author of Dream Team and Seven Seconds or Less)

“What MacMullan and Bartholomew have done here is nothing short of crafting the definitive history of the sport - told through the people who lived it. There has never been a deeper and more star-studded cast of interviewees about basketball, and the authors pull unique insights out of them. A wonderful read.” (Zach Lowe, ESPN senior writer and host of The Lowe Post)

You will really like this audiobook if you like basketball, but I’m afraid that someone who didn’t grow up with NBA basketball in the 90s or earlier might find the book a little slow.

Other than that, I totally enjoyed listening to all the stories and found all parts to be very interesting.

The book also made me wanting to play, coach and/or watch more basketball.