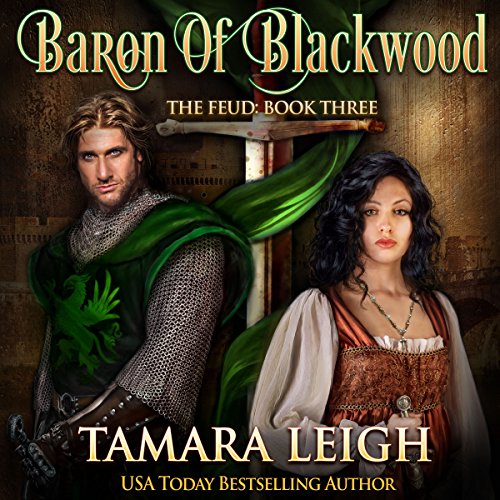 England, 1308. Boursier, De Arell, Verdun - three noblemen who secretly gather to ally against their treacherous lord. Though each is elevated to a baron in his own right and given a portion of his lord's lands, jealousy and reprisal lead to a 25-year feud, pitting family against family, passing from father to son.

England, 1333. When Lady Quintin Boursier leads an army against the Baron of Blackwood to demand the release of her abducted brother, she finds the same fate awaits her. Now she must free herself and discover where Griffin de Arell holds her brother before her family's lands are forfeited. But as the long winter nights unfold and those prowling the black wood move the feud nearer its deadly end, Quintin realizes she may have wronged her captor. And he is as much a captive to her - she whose secret will spoil the prize others seek to make of a woman no man should want.

Baron Griffin de Arell protects those who belong to him, and now that the tempest who dared put a blade to his throat is his, he intends to protect her - if only from herself. However, Quintin Boursier yet has games to play. Though Griffin resists her wiles, when it appears her family's lands are forfeited, a glimpse of her woman's heart tempts him to make the lady his in truth. Now with the enemy responsible for inciting the feud determined to claim her as his prize, Griffin must join his grudging allies in bringing peace to their lands and protecting the woman who first set herself at his walls - then his warrior's heart.

Join Griffin and Quintin in the third and final book in this best-selling medieval romance series as the Boursiers, De Arells, and Verduns seek the light at the end of their long, dark feud.

Have read / heared all three books so far. There where all full with adventure, romance and a lot if excitement!
If you like medivel storys, this series is grat. Also an excellent speaker!