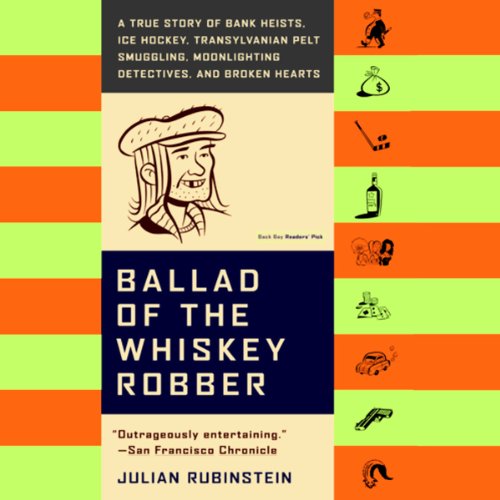 Ballad of the Whiskey Robber

Winner of Borders "Original Voices" Book of the Year and a New York Times Editors' Choice, Ballad of the Whiskey Robber tells the hilarious and improbable true story of Attila Ambrus, the Robin Hood of Eastern Europe. He's the onetime pelt smugger, goaltender (possibly the worst in the history of pro hockey), pen salesman, Zamboni driver, gravedigger, church painter, roulette addict, building superintendent, whiskey drinker, and native of Transylvania who's decided that the best thing to do with his time is to rob as many banks as possible.

Welcome to Julian Rubinstein's uproariously funny and unforgettable account of crime in the heart of the new Europe. Part Unbearable Lightness of Being, part Pink Panther, and part Slap Shot, Rubinstein's tale is a spectacular literary debut - and a story so outrageous that it could only be true.

"Must be heard to be believed." (The Onion)
"Offers that simple pleasure, a great story." (Esquire)
"Outrageously entertaining." (San Francisco Chronicle)
"Rubinstein has found a story of the sort that would make even the most dry-mouthed journalist slobber. Sometimes sad, often hilarious and always absurd." (The New York Times)