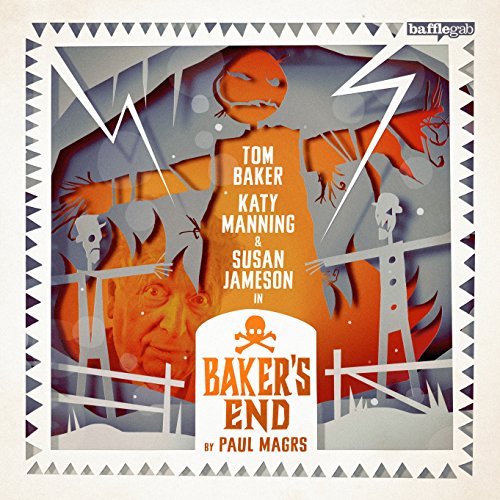 It's raining blood on the village of Happenstance.

As the end of summer beckons, the local folk are planning the festival of Tatty Bogle. Hideous scarecrows are appearing all over the place, and almost everyone is behaving as if they're fudgeknocking bananas. Retired TV star Tom Baker is in the garden making friends with cabbages (especially Eric), and Mrs Frimbly is up to curious, malinky deeds of her own.

Before the festival is over there'll be ritual sacrifice, a nasty homunculus and an almighty ruckus in the front parlour. But that's not all. Tom has had a word with the Ferryman, and it's all aboard the ferryboat as it glides through the kinching morts of midnight....

We're all going to hell. And it looks a lot like Middlesbrough.

Baker's End: Tatty Bogle is the third episode of the critically acclaimed audio series starring ex-Timelord Tom Baker as himself, alongside former Doctor Who companion Katy Manning and Susan Jameson, who played opposite Tom in the AudioGo Doctor Who audio series.

"Paul Magrs and friends have created something very special here; endlessly surprising, riotously funny and thoroughly peculiar." (5/5, Cultbox)
"Susan Jameson, Manning and Baker extract every ounce of (melo)drama from each scene...utterly mad, but great fun." (9/10, Sci-Fi Bulletin)
"Paul Magrs has much to be proud of in this fabulously creative tale.... The Baker's End series may just be the maddest thing to come to audio this millennium." (9/10, Starburst Magazine)
"The splattiest, maddest and baddest Baker's End of them all!.... Tom Baker unleashed is a magnificent thing indeed. Glorious. Utterly, frimblewhackingly glorious." ( Mass Movement Magazine)