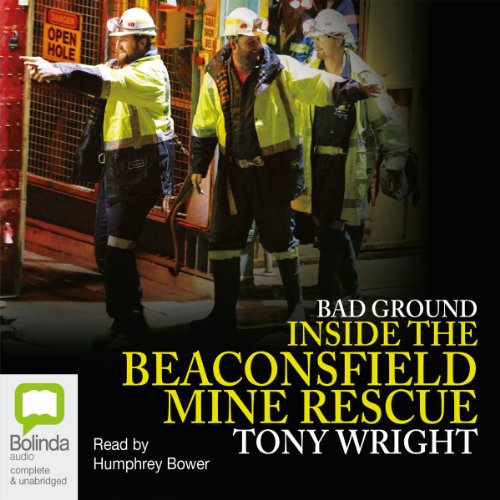 In 2006, a mine collapse in Tasmania trapped two miners, Brant Webb and Todd Russell, for over two weeks, a kilometer underground. Featuring an empathetic, intimate performance by Humphrey Bower, Tony Wright’s Bad Ground: Inside the Beaconsfield Mine Rescue tells their harrowing story.

Wright gives us insight into Beaconsfield’s lucrative but treacherous gold mining operation and recounts the fateful moments leading up to the earthquake that triggered the mine collapse. Through interviews, he recalls Webb and Russell’s time underground and the panicked reactions from their friends and family. Richly voiced in an Australian accent, Humphrey Bower’s performance captures the fear and anxiety of the miners and their loved ones as they waited for their rescue.

Bad Ground is the real story of Australian miners Todd Russell and Brant Webb and their deliverance from entombment in the depths of the Beaconsfield hard-rock mine.

But the seismic event that trapped them affected the close-knit community just as profoundly. Family, friends, fellow miners and rescuers: this is also the story of those who worked desperately against the clock and against all odds to reach the men below. Of those who held vigil, of those who grieved, and of those who never stopped believing.