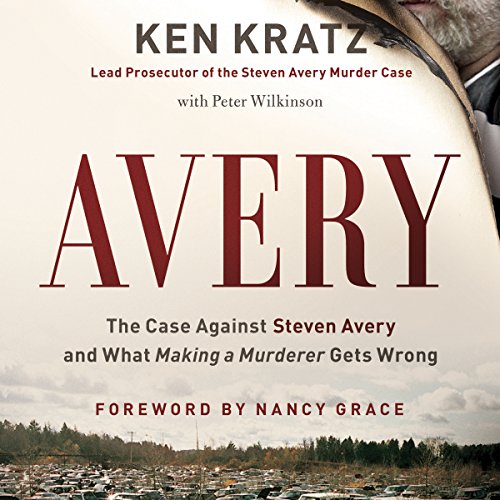 It's time to set the record straight about Steven Avery. The full record - including evidence never before revealed - makes his guilt clear.

The Netflix series Making a Murderer quickly became a huge hit, with over 19 million viewers in the US in the first 35 days. The series left many viewers with the opinion that Steven Avery - a man falsely imprisoned for almost 20 years on a rape charge - was railroaded into prison a second time by a corrupt police force and district attorney's office. Viewers were outraged, and hundreds of thousands demanded a pardon for Avery.

The chief villain of the series: Ken Kratz, the special prosecutor who headed the investigation and prosecution. Kratz's later misdeeds - prescription drug abuse and sexual harassment - cemented his guilt in the minds of the viewers.

This book tells what you don't know.

Making a Murderer raised convincing doubts about Avery's guilt. But now Ken Kratz puts those doubts to rest with Avery: The Case Against Steven Avery and What Making a Murderer Gets Wrong. In it, Kratz demonstrates how the Netflix series leaves out critical evidence, including bombshell facts known only to him. Avery systematically erases the uncertainties introduced by the series, confirming once and for all that Steven Avery is guilty of the murder of Teresa Halbach. What's more, Kratz even provides online access to detailed evidence so listeners can explore every aspect of the case - the largest criminal investigation in Wisconsin history.

Avery tells the full story of the investigation, filled with details and insights unknown to the public. Then Kratz candidly addresses the aftermath. He openly discusses his struggle with addiction and the disturbing behaviors he engaged in, which led him to lose everything: his job, his wife, his house, his car, and his reputation.

While our indignation at the injustice of Steven Avery's first imprisonment makes it easy to believe he was also falsely accused of Halbach's murder, Avery and the evidence it presents - examined thoroughly and dispassionately - prove that in this case, the system worked as it should.