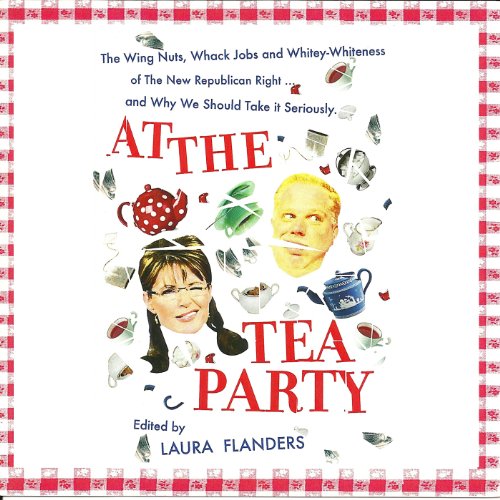 At the Tea Party

The reactionary ranting of the Tea Party is nothing to laugh about, as this once goofy-sounding far-right faction replete with racism, sexism, and homophobia has taken hold of the American political landscape. Edited by journalist Laura Flanders and performed by Julie Eickhoff with sincerity and conviction, At The Tea Party is an energetic exposé of the attitudes and tactics of this dangerous cabal that has taken control of the Republican party. Featuring contributions from a wide range of noted experts, this audiobook will provoke alarmed discussion amongst anyone concerned about America's future.

In the wake of the November 2011 elections, the Tea Party has gone from a well-funded, media-savvy fringe group to become the new kids in Congress. Their presence is unpredictable and potentially explosive. Tea partiers Rand Paul, Mike Lee and Dan Coats now sit in the Senate alongside the GOP's new poster boy, Marco Rubio. In total, some 30 Tea Party supporters won seats in Congress. Their party is evidently here to stay - but what exactly does that mean for the future of the country?

At the Tea Party presents a lively and informed expose of this explosive new force in American politics. It doesn’t paint a pretty picture. You will come to understand the coalition of anti-abortion, pro-gun advocates who comprise the tea parties' shock troops. You will discover what MSNBC contributor Melissa Harris-Lacewell and Going Rouge editors Rich Kim and Betsy Reed have to say about the racism, homophobia, and sexism that fuels the Tea Party fizz.

You will follow the money that flowed from the shadowy organizations of the super-rich to pay for the ads that won the races. You will learn about the unscrupulous gold-peddlers who were virtually the sole underwriters of Glenn Beck's Fox News show. And you will get the up-close-and-personal scoop on the movement's biggest stars - Sarah from Wasilla and the mercurial crying clown Glenn Beck.

With contributions from a wide range of leading experts, At the Tea Party sorts the facts from the frenzy. Most importantly, it looks forward. Will the tea partiers in Congress launch a civil war within the Republican Party? Could they take over the GOP and end up running the country? And what role can the Left play in preventing the tea partiers from remaking America in their own fervid image?

Combining investigative zeal; smart, hard facts; and a leavening of sharp wit and political passion, At the Tea Party stands out among books on the Tea Party phenomenon as an extraordinary listen for anyone interested in the turbulent future of American politics.