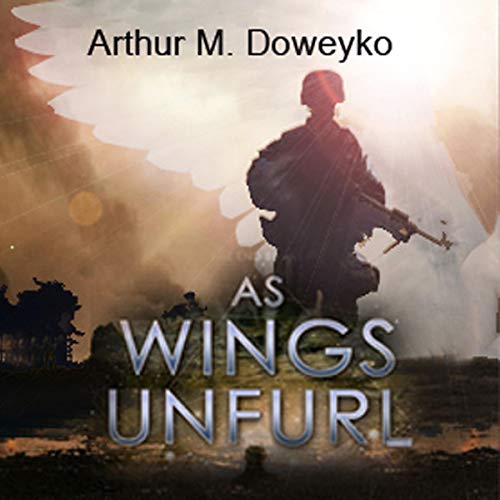 Apple Bogdanski, a disabled Vietnam veteran, worked in a secondhand books store. When a private detective takes incriminating photos of shape-shifting aliens in the act of transformation and sends the negatives to the owner of the bookstore hidden in a book among a shipment of books, Apple is caught between two groups of aliens-one of which studies mankind's development and the other who wants to terminate mankind and claim the Earth for their own purposes. Apple has a helper, Angela, who appears just in time to save his life and make him appear to be a hero. Angela has a beef with the bad guys and she and Apple unite with a few good guys to take on the bad guys.

As Wings Unfurl is an entertaining science fiction novel based on the premise that an alien race planted the seed of the human race of Earth millennia ago and now watches quietly as we evolve. Apple is a fairly well developed protagonist who just wants to be left alone to deal with the hand life has dealt him on his terms. Angela is a member of the alien oversight group dedicated to observation. Strangely attracted to Apple, she must deal with a conflict between her duties, her sense of right and wrong, and her feelings. Dane, as the bad alien, has a single side; the discrediting and destruction of the human race for her own purposes. Yowl and Shilog are Tibetans who are caught up in the war between factions and who provide a notable twist to the ending. Both are far out of the world that they know, but both adapt amazingly fast to the developed world.

Applegate Bogdanski returns from Vietnam with a missing leg, a Purple Heart, and an addiction to morphine. He stumbles through each day, looking forward to nothing and hoping it will arrive soon. When he attempts to thwart a crime, he is knocked unconscious and wakes up to discover that people are once again calling him a hero, though he feels undeserving of the praise.

Apple returns to work and meets Angela, a mysterious woman who claims to be his guardian. Immediately, he feels a connection to her, which morphs into an attraction. But he soon discovers that Angela is much more than she seems.

Apple and Angela are swept up in a conspiracy that stretches through time and space. Together, they must fight to save everything they hold dear from an alien race bent on destroying humanity.