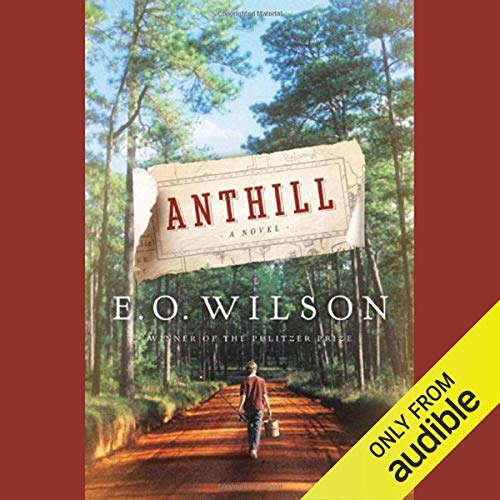 Edward O. Wilson is the world’s foremost expert on ants, and Anthill’s protagonist, Raphael Semmes Cody (aka Raff) — 15 years old when the story begins and a lawyer 12 year later at the novel’s end — is the character Wilson invented who studies ants and has a world’s worth of things in common with his author. Most importantly, both Raff and Wilson join the ranks of conservationists struggling to save the planet from global environmental catastrophe. With Anthill Wilson has written an entertaining and inspirational novel that has in its DNA a robust collection of memes (the cultural equivalent of genes) for propagating the continuing survival of mankind on planet Earth. This includes an extraordinary and not to be missed novella within the novel, The Anthill Chronicles.

Anthill presents the actor Kevin T. Collins with an enticing narrative mix. There is the novel’s third-person narration, putatively told by Frederick Norville, a professor of ecology at Florida State University, a friend of the Cody family, and the first of Raff’s two mentors. Collins’ third person narration thus reflects close familial bonds (Norville is called “Uncle Fred” by Raff). The third-person narration expresses the sympathy Norville has for Raff, and the listener can hear these expressions in Collins’ narration. His expressive craft really kicks in when he speaks the characters’ dialogues, expressions, and thoughts. Collins’ voice quickly and deftly shifts from third-person into the characters. His creative colorations of characters and his accuracy in making an expressive match score high marks.

Anthill begins with a Huckleberry Finn-type adventure with a sociopath pointing a shotgun at Raff and approaches its end with a deadly thriller. This bookend set of near violence and actual deadly violence have the effect of adrenaline shot into Collins. The flight or fight response is transformed into high dose, fast-paced, and nicely sequenced and exciting narration. In between these adventures Raphael Semmes Cody grows into manhood and as a lawyer pursues his commitment of saving from commercial environmental destruction Nokobee, the wildlife area where Raff has done his ant studies. —David Chasey

Inspirational and magical, here is the story of a boy who grows up determined to save the world from its most savage ecological predator: Man himself.

"What the hell do you want?" snarled Frogman at Raff Cody, as the boy stepped innocently onto the reputed murderer's property. Fifteen years old, Raff, along with his older cousin, Junior, had only wanted to catch a glimpse of Frogman's 1,000-pound alligator.

Thus, begins the saga of Anthill, which follows the thrilling adventures of a modern-day Huck Finn, whose improbable love of the "strange, beautiful, and elegant" world of ants ends up transforming his own life and the citizens of Nokobee County.

Battling both snakes bites and cynical relatives who just dont understand his consuming fascination with the outdoors, Raff explores the pristine beauty of the Nokobee wildlands. And in doing so, he witnesses the remarkable creation and destruction of four separate ant colonies (The Anthill Chronicles), whose histories are epics that unfold on picnic grounds, becoming a young naturalist in the process.

An extraordinary undergraduate at Florida State University, Raff, despite his scientific promise, opts for Harvard Law School, believing that the environmental fight must be waged in the courtroom as well as the lab. Returning home a legal gladiator, Raff grows increasingly alarmed by rapacious condo developers who are eager to pave and subdivide the wildlands surrounding the Chicobee River. But one last battle awaits him in his epic struggle. In a shattering ending that no reader will forget, Raff suddenly encounters the angry and corrupt ghosts of an old South he thought had all but disappeared, and learns that war is a genetic imperative, not only for ants but for men as well.

Wilson channels Huck Finn in his creative coming-of-age debut novel....Lush with organic details, Wilson's keen eye for the natural world and his acumen for environmental science is on brilliant display in this multifaceted story about human life and its connection to nature.” ( Publishers Weekly)
“A foremost authority on ants, an eloquent environmentalist, and the winner of two Pulitzer Prizes for his exceptional nonfiction, Wilson has written a debut novel of astonishing dimension, acuity, and spirit.” ( Booklist)
“Wilson’s foray into fiction allows him to write more expressively, psychologically, even spiritually about the great web of life, humankind included, and the irrefutable rules for ecological survival." ( Chicago Tribune)