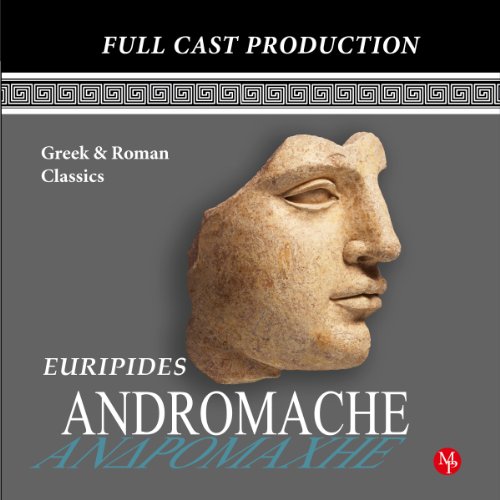 Euripides' classic tragedy in a new verse translation and a new, full cast audio production. After Troy fell to the Greeks, Andromache, the wife of the slain Trojan king Hector, was taken as prize and given to Achilles' son Neoptolemus as his concubine. He treated her kindly, and in the fullness of time she bore him a son. But Neoptolemus went on to take as his wife Hermione, the daughter of Menelaus, but she could bear him no children. Enraged with jealousy, Hermione plots the death of Andromache, and the play opens with Andromache taking sanctuary at the temple of Thetis, the goddess who is also Achilles' mother - Achilles, the man who killed her husband.

Often considered as mere political propaganda in the conflict between Athens and Sparta, Andromache showcases Euripides' skill in a vivid and tender portrayal of a powerful woman brought low by fate.

About the author: Euripides was the youngest of the three great dramatists of classical Greece, with Sophocles and Aeschylus being his elders. Born around 484 BC, he authored some 92 plays, of which 19 have survived the ravages of time. Ever the iconoclast, Euripides portrayed the gods as capricious agents of fate, unconcerned towards men or righteousness. Mortals, however, were portrayed with all their innate characteristics, from tenderness to treachery, and on a human scale that set him apart from the heroic and larger than life characters of his contemporaries. This concern for the ordinary man would hold his plays in good stead during the Hellenistic period and even today makes Euripides one of the most accessible playwrights of the ancient world.

About this production: This production of Andromache was recorded at Mirror Sound Studios in Seattle and Voice Trax West studio in Los Angeles in 2012-13, and features some of the best new talent in theater in the Northwest including Sonya Joseph in the title role, Andrew McGinn as Menelaus, Gene Openshaw as Peleus, and Amy Escobar as Hermione. Unlike conventional recordings that use simple left-right panning to create localization of the sound channels, this recording uses synthetic binaural imaging technology to create a surprisingly lifelike sound image of the performance when played using headphones, while still retaining a pleasing stereo image when played through speakers.